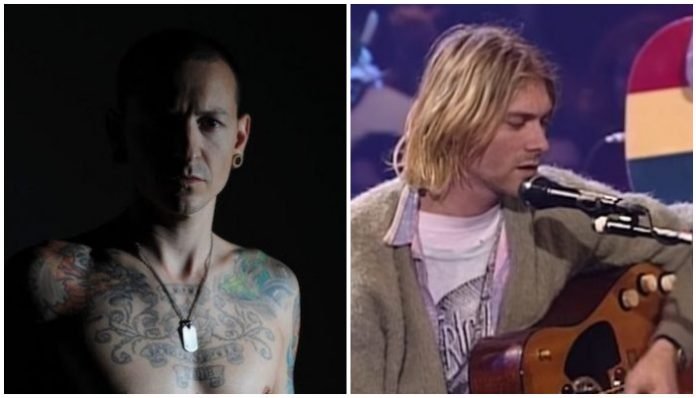 Nirvana‘s influence on musicians has been massive and now footage of late Linkin Park frontman Chester Bennington singing their track “Polly” as a teenager is surfacing.

Bennington’s former band Grey Daze shared the old video showing him singing along to the track while surrounded by other people as the song’s chords get strummed out on an acoustic guitar.

The clip shows a very young Bennington sporting curly hair and glasses while singing along to the track.

Today (June 1), the band shared the short video with a simple message saying they found the old footage.

Grey Daze were Bennington’s band prior to joining Linkin Park. More recently, the members of Grey Daze have discussed the re-recording of their music for Amends and their feelings on the iconic musician’s passing. In February 2017, plans for re-recording their music were already underway but were pushed off following his passing.

Bassist Mace Beyers describes his publicist calling him to say he needs to go online and see what was happening. “I went online and sure enough, it was everywhere.” “I immediately called Sean [Dowdell].”

Grey Daze drummer Sean Dowdell says he “immediately called Talinda [Bennington] and said ‘Hey, I know you don’t want to tell me details and I don’t care about any of that. I just want to know what you guys need, how can I help you?’ And she just said ‘Come out to L.A. and help me just, get here.”

Further, Dowdell explains that through the grief he was also upset they didn’t get to finish what they started together.

“Initially, the intent was just to finish it and put it out on my own. And, not to worry about it. But, as the process started moving forward and we started working with different engineers and studios, we came to the realization that this music was really important.”

What do you think of a teenaged Chester Bennington singing Nirvana’s “Polly”? Let us know in the comments below.

Louder Than Life is officially canceling their 2020 festival