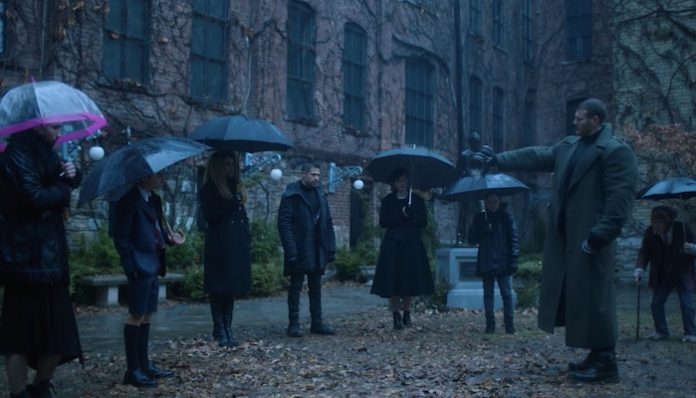 Netflix‘s The Umbrella Academy just whipped fans into a frenzy with a new teaser. The teaser shows a pneumatic tube and hints that something is coming tomorrow (May 28).

We already know that The Umbrella Academy season 2 will officially hit the streaming platform on July 31, but this new tease will most likely be our first new look at the Hargreeves.

Read More: It’s going to be a while until you see Evan Peters return in ‘AHS’ season 10

The show finished filming back in November and then went into post-production. Numerous cast members shared photos celebrating the end of filming, giving their thanks to their fellow cast and crew. Shortly after, the show ended up sharing the first posters for the season 2. The images focus on the eyes of each of the Hargreaves family members in an umbrella silhouette.

Just over a week ago, we learned when season 2 of The Umbrella Academy would be hitting Netflix in a fun, dance-filled video with the cast. You can watch that below.

Read More: You can now get your ‘Harry Potter’ fix all on one streaming platform

Now, in a new teaser clip, it seems we’ll be getting our first look at the Hargreeves on May 28 in the form of “time travel composites.” These will most likely tell where, and when our favorite family of misfits are getting into trouble.

have you seen the Hargreeves? time travel composites coming tomorrow…

As we know, pneumatic message containers are favored by the Commission—the group in control of the space-time continuum. We’re not sure how this will play out tomorrow, but it sure is keeping it interesting.

In a recent interview with Comicbook.com, The Umbrella Academy’s music composer, Jeff Russo explained that a big setting change is coming. He also went into how they’re planning to approach incorporating music in the show revealing it will take a similar direction as season 1.

Read More: Demi Lovato hit a metal mosh pit at 14 and loved every second of it

Stay tuned in for May 28 when we’re sure there will be some great news. Until then, rest assured knowing that the entire fandom is as excited as you with some reactions below.

listen….this is a process, i gotta print the posters and everything!!!!! tmrw i promise

TIME TRAVEL IS UNPREDICTABLE IDK HOW TO WORK IT

More on The Umbrella Academy

It has been a less than a year since the third volume of The Umbrella Academy  comic wrapped up but Gerard Way said in a recent Instagram post that he’s working away at the fourth volume right now.

The third volume of Gerard Way’s The Umbrella Academy comic series wrapped with the final issue coming in June 2019. The third volume faced lengthy delays though. Its creation was around the time Way was working on getting back into music. It took about a decade from being announced at San Diego Comic Con in 2009 to fully see release.

In it, he discusses the nine character designs revealed as his contribution to the Quarantine Coloring Book project.

He also revealed two colorized versions and explained a bit more about the idea.

The first is done by Matt Wilson which is based on the second which Gerard ended up providing as a reference point. He says he won’t reveal the title of the comic. But he says “it is something I worked on day and night for a few months back some years ago.”

The comic is “a somewhat ongoing limited series.”

He’ll be releasing around six issues at a time over the course of several years. Many of the ideas seem firmly in place, but after reaching out to the artist Gerard Way wanted, the artist was booked for several years.

So, for the time being the idea was shelved. But, Way found a new artist now and says “it’s a matter of when I can write this.”

He’s working away at new material for The Umbrella Academy which is why there might be a delay.

I wanted to wait until people got to spend a few days coloring my @thequarantinecoloringbook contribution before revealing two colored versions of it. The first was done by the amazing @fatheadwilson, who colors a bunch of great comics. I had reached out to him and asked him to color the piece, called Pink Station Zero, and gave him a quick flat colored version I did as a guide to look at, which is the second image in the post. I won’t reveal the title of the comic, but it is something I worked on day and night for a few months back some years ago. I was very much ready to go with the comic, which is a somewhat ongoing limited series, released about 6 issues at a time, over the course of some years. This image was an exploration of some of the characters from the comic, and I had a lot of fun coming up with 9 very different looking characters, all strong personalities. One of these agents went rogue, and one of them got killed, leaving room for the Earth person in the center to take their place. So I worked on this idea and wrote some script pages, super inspired. But when I reached out to the artist I had wanted to draw the book, they were booked up for a long time, and wouldn’t be able to draw it for years, so the idea went on the shelf. When I’m coming up with comics, sometimes I already envision who I want to draw it, based on the energy I think the story needs, and if that artist can’t do it, I tend to just shelve the idea until they are able to do it, or if I find another artist that grabs me, which I eventually did, but now it’s a matter of when I can write this, as I am in the middle of scripting the long awaited Volume 4 of the Umbrella Academy, which is my main focus and I’m very excited about that. But for now, enjoy these characters, and maybe you’ll see them in the future. I very much enjoyed seeing your colored versions of the piece, your interpretations, as I always enjoy seeing for the coloring book project. Take care and stay safe. #comics #thequarantinecoloringbook #pinkstationzero

What do you think The Umbrella Academy is teasing for tomorrow? Tell us your thoughts in the comments below!

See where ‘American Satan’ left off in the first ‘Paradise City’...

Which ‘Tiger King’ star are you based on your music taste?

You won’t be seeing the next evolution of ‘The Purge’ event...