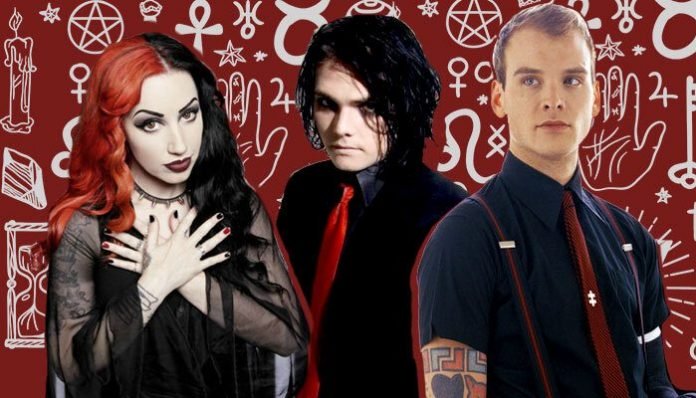 Rock, metal and punk musicians have long been accused of making the devil’s music. While that isn’t true for the vast majority, some have indeed practiced witchcraft in various forms. Whether it’s some of the founding artists behind rock ’n’ roll or modern-day rockers, witchcraft has found its way into the minds of musicians many times before.

Take a look below for 10 musicians who have dabbled in witchcraft.

New Years Day vocalist Ash Costello has a long history with witchcraft. Her grandmother is a practicing Wiccan, and she’s got a collection of voodoo dolls (as well as a strange collection of human teeth), so it’s no wonder that occult themes have crept their way into her band’s music.

Megadeth ringleader Dave Mustaine had practiced black magic throughout his teenage years, which eventually inspired several songs on their sophomore record, Peace Sells…But Who’s Buying? The band actually refuse to play “The Conjuring” live now because the song contains instructions for hexes in the lyrics.

Lana Del Rey doesn’t seem like a likely candidate for witchcraft, but in 2017, she publicly announced that she put a hex on President Donald Trump. Shortly after he took office, she put a hex on him, and while it sadly didn’t work in any way, it does add an extra layer of weird to her personality.

Late Huntress vocalist Jill Janus was a self-professed pagan and once described herself as “a little white witch who loves heavy metal and weed.” She also said she’d love to live in a witch hut in the woods alone tripping on mushrooms. As far as her music goes, she’s admitted that she let witchcraft guide her lyrics and fell into a trance while writing her words.

Godsmack singer Sully Erna is a practicing Wiccan, though he’s told Rolling Stone he doesn’t want to be the poster boy for witchcraft. He’s cautious about sharing his beliefs given how many people view witchcraft negatively, but he sees it like any other religion—as a thing people get personal satisfaction from.

Read more: QUIZ: Build an altar and we’ll tell you which witch you are
King Diamond

King Diamond is known for following LaVeyan Satanism. While he believes it to be a philosophy rather than a religion, it’s clear that his satanic lyrics mean a lot more personally than most metal musicians. He did say in a 2006 interview, though, that he’s no longer looking to find any sort of meaning for religion, but at least all of his classic tracks have been inspired by his practice.

Elvis Presley was already one of the most famous musicians of his time given the outrage over his sexually charged dance moves, but on top of that, he was also practicing witchcraft at one time. His wife Priscilla Presley says he became fascinated with the occult in search of a “higher state of consciousness” when his record sales were declining with the success of the Beatles.

While not a witch himself, David Bowie held deep beliefs in witchcraft, and his fear led to him practicing it in various forms. While it may have been related to delusions from cocaine abuse, Bowie once hired a witch to help remove a curse he believed he had, which he worried was going to end with him being forced to impregnate someone to create a devil baby.

Alkaline Trio and blink-182 member Matt Skiba once claimed he used witchcraft to curse the infamous Fyre Festival. In an interview with NME, Skiba says he considers himself a pagan and a witch and used “all the electricity and energy in my body against that thing happening.”

My Chemical Romance’s return has been steeped in occult imagery, so it’s not surprising that Gerard Way has interests in witchcraft, although he says he isn’t a practicing witch himself. On Thrice frontman Dustin Kensrue’s podcast Carry The Fire, he says his Catholic ties eventually led to needing spirituality in his life after not believing in God, and he ended up practicing witchcraft in various forms.

“I’m a believer in the fact that the universe is chaos and born out of chaos, and it’s uncontrollable, and there’s kind of no rhymeries into anything, and tragedies and accidents and bad things happen and good things happen, and it’s really just chaos being this constant true thing in the universe, and I came to those discoveries through my study of magic, occultism and things like that,” he says.

He further explains that he’s learned about magic and witchcraft through Grant Morrison. Similarly, he says his wife isn’t a practicing witch but “is naturally adept at those kinds of things. She’s really in tune with nature. She knows a ton about herbology, [and] a lot of the founding cornerstones of witchcraft is just part of her life.”

This is how Post Malone’s cannabis brand Shaboink is helping relief...

Trapt are taking a break from Twitter beefs to put out...