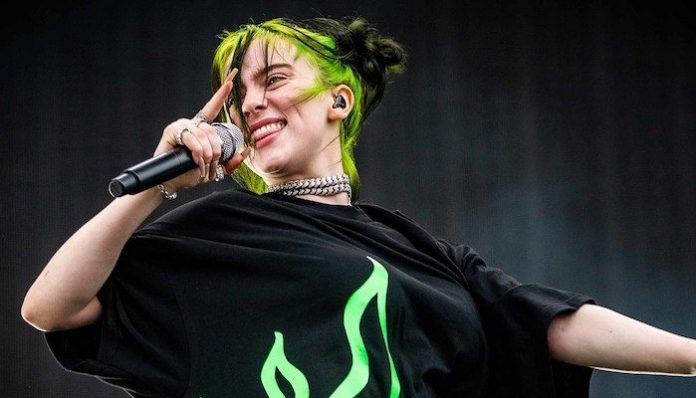 Billie Eilish has been working on new music while in quarantine. In addition to launching her new radio show on Apple Music called me & dad radio, Eilish recently revealed that her and FINNEAS wrote an entire song.

Eilish said the new track really captured how she was feeling in the moment and she hopes people are able to try and see the bright side of the coronavirus pandemic.

Billie Eilish has popped in and out of the news since the coronavirus rocked the world to its core. She had barely kicked off her tour when the pandemic caused her to postpone the remaining dates. Since then, we’ve seen her in a few live streams, serenading puppies and sharing songs that inspired her debut LP WHEN WE ALL FALL ASLEEP, WHERE DO WE GO?

In a recent interview with Zane Lowe for Apple Music, Eilish revealed that she has been working on new music (even though it took a while) while locked in and that’s she’s been pretty lucky through the pandemic because she’s been fostering puppies.

“I was fully uninspired for the first three weeks of this. I was not about to make music and I don’t know why. It was just like ‘this is not interesting to me right now.’ It was annoying though because that’s the kind of thing you want to be doing in quarantine. But I wasn’t feeling it.”

“I know that everybody, like the beginning of this really got to people,” Eilish says. “I didn’t really have that experience because I cheated, I rescued two puppies, or fostered two puppies. So, I was completely distracted.”

Lowe asked he if the creative juices had started flowing since her initial reservations and she says it hit a couple of weeks ago.

“We’ve been in the ‘stu,’ which just means FINNEAS’ basement, basically. We actually, we wrote a whole song in its entirety—an entire song, which is kind of rare for us. I really love it. It was like exactly what I needed to say when we wrote it.”

Billie Eilish goes on to discuss the song a bit further, while also commenting on how she’s feeling during quarantine and what she hopes for others.

“Honestly, I feel great,” she said. “The song I was talking about earlier that we wrote a couple weeks ago that felt so right was…I wish I could sing it for you, but I can’t,” Eilish said to Lowe. “It was just about, there was this part in it—I needed to say this—which was I know I’m supposed to feel unhappy right now because of this break and because I’m not seeing anybody. I feel like there’s this kind of thing that I feel like is floating around of like you’re supposed to be missing people. You’re supposed to be missing this person and be missing people in general. I kind of have this feeling of like, I miss my really close friends, I miss people, of course I do, but I also at the same time am liking the space.”

“I’m liking that everybody can kind of grow right now. I hope that people are letting themselves grow instead of just reminiscing and wishing they were with other people.”

Eilish dropped her last new music back in February with her haunting addition to the James Bond franchise themes “No Time To Die.”

Are you excited about new Billie Eilish music? Sound off in the comments below!

Here are 10 times our favorite TV shows went way over...

Funko offer new Pop! figures for the king of horror himself...