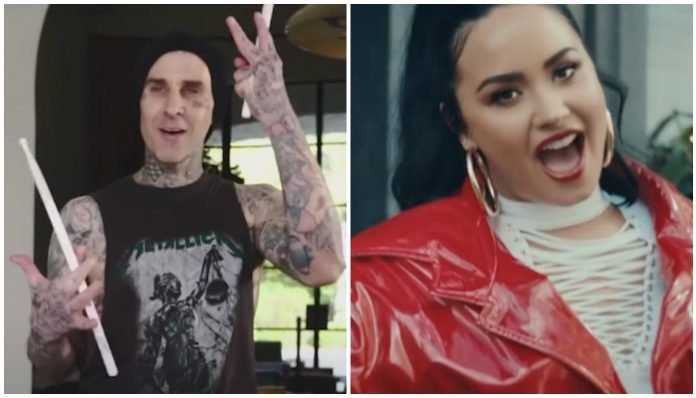 blink-182‘s Travis Barker doesn’t seem to be slowing down when it comes to new projects. Just last night he appeared on The Late Late Show with James Cordon to perform with Machine Gun Kelly on his new single “Bloody Valentine.” Now, Barker is giving Demi Lovato‘s single “I Love Me” an emo remix.

Released this week on streaming services, the “I Love Me [Emo Version]” featuring Barker is taking us all back to our emo days.

Read more: No one in blink-182 can agree on how to say the band’s name

Lovato’s self-love pop anthem “I Love Me” was released earlier this year. The song’s debut followed her emotional performance of “Anyone” at the Grammy Awards back in January. “Anyone” was written and recorded four days before her near-fatal overdose back in 2018.

Following the success of her recent singles, Lovato enlisted the help of Barker to give “I Love Me” the emo rock treatment. Lovato herself has deep roots in the emo music scene. In the past, she has made various appearances at Emo Nite and has been seen singing along to Underoath‘s “Reinventing Your Exit,” Paramore‘s “Misery Business” and more. She also teamed up with We The Kings in 2010 for “We’ll Be A Dream” and performed the song with the band at Warped Tour.

With all of this, it comes as no surprise that Lovato and Barker teamed up to create a new version of this single. Barker himself has worked with a number of artists recently including YUNGBLUD, Halsey, Loote and more. He also produced MGK’s forthcoming pop-punk album Tickets To My Downfall.

“I Love Me [Emo Version]” still has its pop-influenced sound and Lovato’s powerful vocals in it. For this version, electric guitars and signature drumming from Barker have been added to give it a more emo-rock sound.

Along with this, the song’s lyric video is definitely taking us all back to our MySpace days. The video opens up with Matt Cutshall in front of his laptop. Cutshall has become known for his viral emo parody videos including the “felt emo might delete later” parody of Cardi B‘s “Money.”

The lyric video also features nostalgic images of old MySpace profiles, comments sections and more. It even has those emo glitter icons of hearts and skulls we used to paste all over our profiles.

The lyric video for Demi Lovato’s “I Love Me [Emo Version]” featuring Travis Barker can be watched below.

What do you think of the “I Love Me [emo version]?” Let us know in the comments below!

Frank Ocean addresses criticism from the LGBTQ+ community about his club...

Hear two We Are The In Crowd songs you might not...