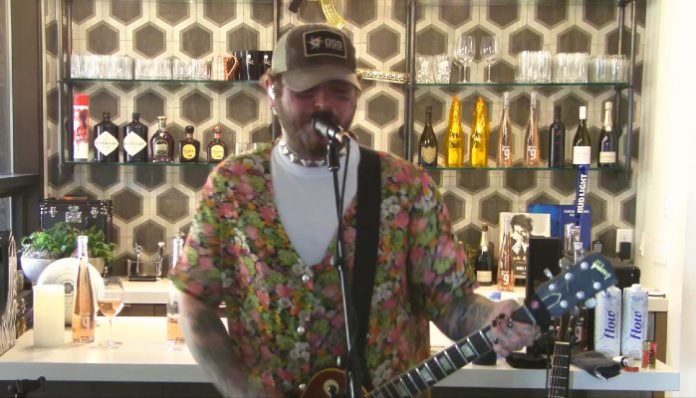 Post Malone hosted his Nirvana tribute livestream today and he managed to fundraise millions of dollars while jamming out some classic tracks from the band along with Travis Barker on drums.

The livestream was raising money for the United Nations Foundation’s COVID-19 Solidarity Response Fund for the World Health Organization and so far ended up bringing in over $2.5 million.

The livestream saw Post Malone wearing a flower dress while Barker, as well as Nick Mack on guitar and Brian Lee on bass, played from different rooms in his home.

The setlist for the livestream included some iconic tracks from the band including “Territorial Pissings,” “About A Girl,” “Heart Shaped Box” and tons more. You can see the full setlist below.

Frances Farmer Will Have Her Revenge on Seattle

Come as You Are

Something in the Way

Krist Novoselic even gave his seal of approval with a series of posts promoting Post’s performance.

So proud of @PostMalone and crew. pic.twitter.com/50kzSukVTW

I don’t think these fellows can play any better. They are on fire!!!!

Prior to it taking place, Courtney Love also gave her blessing for the performance.

What do you think of Post Malone’s Nirvana jam session? Let us know your thoughts in the comments below.

How you use TikTok may be changing soon

10 musicians streaming games and rocking out on Twitch