Home News When The Sun Sets open up about life’s troubles in new single... 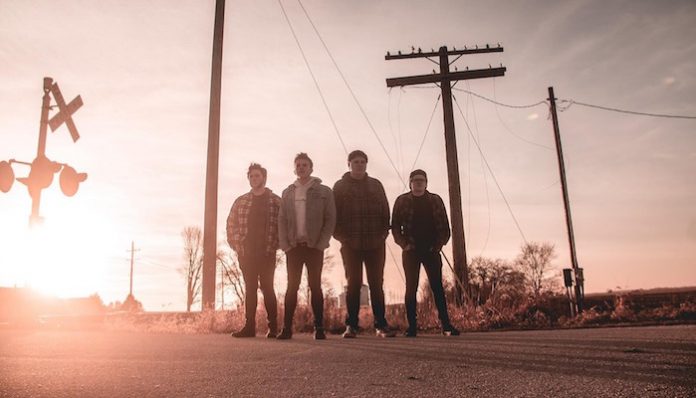 When The Sun Sets are too familiar with the troubles life can hand you, which they express in their latest single. The band are gearing up to release Transparent later this spring and are teaming up with AltPress to premiere the latest track off the EP, “Ceiling.”

Formed in 2018, the Chicago-based quartet features bassist Noah Evert, drummer Tyler Dombrowski, guitarist Harrison Hoffman and vocalist Zack Baumgartner. Recently signing to Lost Music Collective, the pop-punk outfit plan to drop Transparent May 8. They hope to connect with their fans on a more intimate level as most of the tracks come from a place of extreme vulnerability. Mixing genres from metal to pop, the band created a heartfelt anthem focused on life’s hardships and healing.

Shot by Alex Zarek, everything about the “Ceiling” imagery has purpose, down to the smallest detail. From the way the band move to the lighting and temperature of the set, Baumgartner reveals the reasoning behind how the video was shot and the true meaning of the track.

From releasing “The Wave” in 2018 to now, When The Sun Sets display a strong 2000s pop-punk vibe. Was this sound something the band were drawn to since you all first started, or did it take a while to find your niche?

Growing up, we all had a love for those popular 2000s pop-punk bands like Green Day and A Day To Remember, but we never knew what our true sound would be until we began writing our upcoming EP, Transparent. We all have our own favorite genres in music from pop punk to metal. When it came to writing our tracks, they became this Frankenstein of all the genres that we love. We feel that through this record, the sound we have been going for since 2018 has finally reached its full potential.

The lyrics for “Ceiling” sound like they are about doubts and stress in a relationship. What influenced the track?

The lyrics for “Ceiling” are definitely about doubts and stress, but the way the song is perceived can vary based on what the listener is going through in their life. I wrote this song about struggling with an addiction that was making me decompose from the inside out quite literally.

The song was written about nicotine addiction, which most of our band members have struggled with. We wanted to let the listener dictate what this song is truly about in their own life, but it’s meaning in our lives is a constant battle with nicotine.

Read more: 20 pop-punk albums from the 2010s that deserve more credit
Compared to your last music video for “February,” where it tells the story of a couple, the band are the main focus in “Ceiling.” What are the differences between shooting in several locations vs. one?

“February” was a video that was meant to tell a story about love and all of the things that are entailed in “true love.” The band are the focus in the “Ceiling” music video, which was no mistake. This record is about the issues that we have gone through within the past year and the struggles that came along with them. We brought energy onto the set because a positive attitude can kick any bad habit, which is why our movement in the video is focused on through slow-motion and other effects. You can also see that the video portrays a cold setting, from the blue color tone to being able to see our breath. Every artistic detail that was put into this video has meaning, and a lot of the subtle aspects come from our director Alex Zarek.

Your debut EP with Lost Music Collective, Transparent, drops May 8. What are you hoping your fans take away from the album? Does the band have any other plans for 2020? How will you navigate future plans due to the current state of the world?
Read more: 20 scene albums from 2003 you probably still know every word to

This album has been a very tough piece of work to finish because it dives deep into who we are as a band. Some of the songs throughout the record deal with issues that often have not been talked about, even within our own households with our families. The record is titled Transparent because we want to display who we are to our fans without any blurred lines. We want to be open about who we are and embrace our struggles because we know that others may be going through the same things alone.

This record and the goal of this band is to make sure that people never feel alone and can always live in a positive environment through our music. As of now, we are really waiting to see what this world brings in 2020 with the conditions that we are all living under at this point in time. With the help of Lost Music Collective, we are finding new ways to keep bringing new music to our listeners and new ways to enjoy it within the safety of their own homes. This will mean more live streams, Q&As and other fun ways to interact while respecting social distancing to keep everyone healthy and happy.

The band will be hosting a livestream via Facebook Saturday, April 25. Check out the music video for “Ceiling” below.

What are your thoughts on When The Sun Sets’ latest music video? Let us know in the comments below!

Ticketmaster UK is now giving refunds but there’s a catch