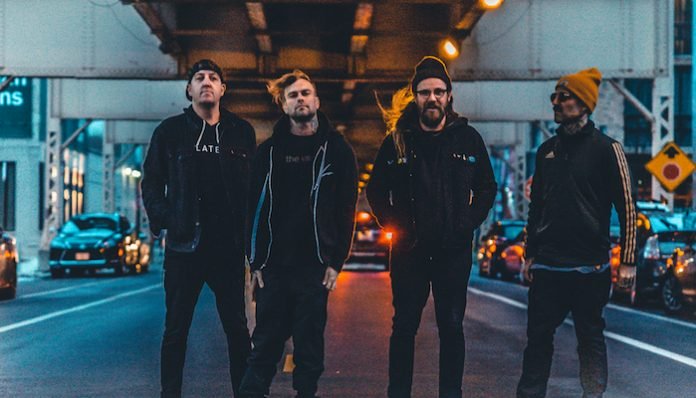 After nearly 20 years of crawling down wormholes that share a striking resemblance to a mad tea party in Alice In Wonderland, the Used have emerged covered in soot but stronger than ever. Rather than soaking their eighth album in dark desperation, Heartwork allowed the group to focus their efforts and psyches on creating a body of work that feels both familiar and revolutionary.

Read more: Here’s why Puddle Of Mudd’s viral Nirvana cover sounded like that
The Used’s last album, 2017’s The Canyon, was described as the most soul-wrenching album in your discography. How would you describe Heartwork?

Heartwork is back to a lighter side of the Used. The Used have always been a band that’ve broken barriers with genres. This record was about saying “yes” and having fun in the studio and not really exorcising any demons, so to speak. So I think this record sums up the first three records in our career as far as colors and sounds and the approach. It’s really all over the place. This is our most fun record.

Even the songs that initially had a bit more of a heartbreaking sentiment were changed in the end. [The line in] “The Lighthouse” was initially “I can’t be your lighthouse,” but when I sent a demo home, my 6-year-old daughter Cleo was like, “Can you please change it to ‘I can be your lighthouse?’” We’re in a bit more of a positive place in our lives than to dwell desperately on the heartbreak. But I think it still is in there. The record’s all over the place. There’s a yearning. There’s a real nostalgia for this type of music from the early 2000s that we jam-packed full of feeling. We really like songs that will take you on a journey and help you figure out your life.

In the two releases, “Paradise Lost, a poem by John Milton” and “Blow Me,” there’s a lot of imagery that was made famous on In Love And Death. Why was that imagery, especially the “heart noose” designed by Alex Pardee, resurrected for the new album?

The “heart noose” just became synonymous with the Used. You can see that symbol, and it’s like our Misfits skull. We really love the imagery. We really love the symbology behind it. After 20 years, we’re quite proud of it. We thought it would be amazing and fun to feature the heart noose again.

Read more: Here’s what Ticketmaster might be offering if your show got postponed
“Paradise Lost, a poem by John Milton” seemingly pays homage to the Alice In Wonderland-meets-Brothers Grimm world created in the “All That I’ve Got” and “I Caught Fire” music videos. Was the connection obvious while you were writing the music?

In a way, it’s a callback to 2004, but at the same time, it’s a play on the poems, as well. It’s this poem about the beginning of the world and Adam and Eve. It feels very fairy tale-like to me. It feels almost Disney with Satan, the snake Adam and Eve and a failed revolution. I have two daughters, so my whole life is full of fairy tales.

You worked on The Canyon with Ross Robinson, but you’ve returned to work with John Feldmann for Heartwork. What does Feldmann offer you as a producer that no one else can?

He knows me better than a lot of my closest friends know me. And he is the hardest-working producer out there that I’ve come across, maybe the hardest-working musician. He’s so driven [and] so passionate. He loves what he does, and it shows. He’s also a really good filter for some of my more overcomplicated literary references and some of the stuff that can feel too erudite and obsessive. He is a great structure for large words and overcomplicated concepts. He helps me keep things simple. He’s a filter for the stuff that I don’t understand or that’s too tricky for most people to wrap their head around. He’s also such a positive instrument in the studio. There were a lot of times where writing and being away from family can get pretty dark. But he is such a positive influence.

Read more: Trapt try to get Taylor Swift’s attention by digging up 2014 I Prevail diss
How were you able to create something entirely new while also paying tribute to your previous release?

It was a team effort. When you’re in the studio, sometimes it is a solo mission for each individual musician. You get a scratch track with drums, and you get a guitar on there, and then you lay the bass down. This time around was more about everyone in there with their heads together. There was never any work that I took home. I never worked on lyrics outside of the studio except on one or two tracks. So everybody in the band, including Feldmann, was all heads at all times with lyrics, melodies, song parts, bridges [and] transitions. So in a way, you did help facilitate the flow of the record. Everything moves so quickly in the studio. It’s very quick fire. We never linger around on the song the next day. We just scratch one out, fill it up from our subconscious and then move on and work on a new one the next day. It’s nice to not really have to overthink anything. If you have stuff that you have endless amounts of time on, you could endlessly correct it. Sometimes that just gets in the way.

What’s the significance of revisiting your previous releases to create an album that’s dynamic, inspiring and revolutionary in an industry dominated by streaming services and Top 40 hits?

None of that really makes any difference to us. We make music because we love to write songs. It’s not only fun for us, but we’ve been doing it for so long, we feel like we’re pretty good at it. Then we get to have even more fun taking it out on the road and seeing how the songs translate live. All of the other stuff can be a distraction and get in the way. But we’re not a brand-new band, so we get to avoid all the perils and traps of social media because we already have an established place in the music industry. It’s nice [that] we don’t really have to concern ourselves with so much of the horribly depressing parts of what’s really special. Good music will always shine through all of the horrible things that surround the music industry. Punk rock has always been for those who take a chance. Punk rock is meant to be the alternative to what is popular. I think everybody should take their lives back and quit billionaire social media programs. But that’s just me.

Read more: twenty one pilots have accomplished something no one has in 76 weeks
How did you enlist Joey Bradford from Hell Or Highwater for the band? What about him fit your grand plan for this album?

He’s a family man. His heart is full of gold. I’ve never seen him be ill-mannered or get out of line with anyone. And that’s very, very important for the Used. We’re all about love and the loving energy that we spread on tour that touches people in a way that changes lives and that can really have a drastic effect on your future if you let it. It’s a positive mindset that has kept this band relevant and on tour. I’ve been saying it a lot to people lately. Especially nowadays with things being so crazy and so tough in the world, it helps just to say one positive thing to yourself in the morning and see how much that actually affects your life.

What are you hoping longtime fans will take away from this album?

I think music is a little bit more simple than that. It’s easy to forget how simple it is. Just put on something and listen to it and get lost in the vibration of it. But this record is so packed full of heartfelt urgency and longing. Just like every human being on this planet, [there’s a] need to feel loved and to belong to something. There’s a lot of giving of love on this record, as well. And I think we live in such a crazy time that it’s so packed full of strong politically charged messages and things of a modern nature that feel easy just to smirk and smile all the way through it.

Read more: These 15 punk albums from 1982 continue to bring the fire to this day
Have recent events in the United States had an influence on your writing?

Everything impacts everything. I’ve lived in Australia for eight years, but that doesn’t separate me from the politics of the United States. It’s prevalent, and Trumpism is spreading like a virus. There’s a certain amount of underlying fear in the world. Fear of change, fear of anything different. Australia’s not that far removed from the United States in a way, but we made a record about revolution in 2014 [Imaginary Enemy]. That chance is gone now. So this record touches more on the failed revolution. Humans are resilient, [and] the world is resilient, and I think the truth lies somewhere in the middle on almost every single issue. And I think we will be fine. I think that. But I don’t know that.

Were there any tracks that were particularly hard for you to write or any subject matters that you weren’t sure you wanted to share with your fans?

No, these are all these amazing subject matters for me. There are a few things that I touched on that I wanted to get out for 10 years. I’ve wanted to write a song about how much I hate this song for 10 years [“Wow, I Hate This Song”]. And I’ve wanted to write a song about how I just want to feel anything for a really long time. I’ve never been this excited about the Used. There’s a lot of really fun, tricky word games on this record, lyrically and sonically. We’ve never been so proud. It’s a good feeling.

Read more: Hear a former Attack Attack! member play a metal version of Fall Out Boy
Do you think there’s a particular song that will be your favorite to perform?

I think “Cathedral Bell” will be really fun to perform. “Blow Me” feels like the song that we’ve been playing for 10 years already. It’s incredible. I can’t wait to play “The Lottery.” It’s the heaviest song the Used have ever written. We sent it to Caleb Shomo from Beartooth, and he absolutely killed [i[it]There are quite a few features on the record, and we’re really excited. Travis Barker plays on “Obvious Blasé.” Mark Hoppus from blink-182 sings on “The Lighthouse.” And there are quite a few other little hidden gems in there as well.

We can’t wait for the Used fans to hear it. And as always, thank you to the hardcore fans for keeping this dream alive for 20 years. It’s just overwhelming, and we’re humbled.

This excerpt originally appeared in Issue 380 with cover stars Palaye Royale. You can get the issue here.

10 rising metal bands you need to bang your head to...