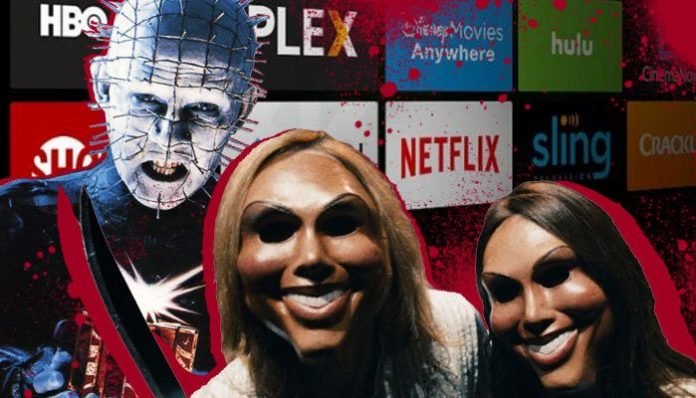 Streaming numbers have been going up because everyone’s been spending more time at home the past month, and there’s plenty of horror movies to check out while physically distancing. Whether you’re streaming movies on Netflix, Amazon Prime or Hulu, there’s a lot to pick from in terms of ones that will scare the crap out of you.

Take a look below for 20 of the best horror films to stream right now.

Read more: UFOs are being spotted by Asking Alexandria, From First To Last and more
Contagion (2011)

Contagion has seen a massive spike in interest during the coronavirus pandemic due to its similarities to what’s happening in the real world. The virus in the film has much worse statistics for infection and death rates than what we’re all dealing with, but the realism of how everyone is affected in the movie gives a terrifying Hollywood depiction of a global pandemic.

John Krasinski’s big step into the world of horror is a really good way to spend an hour and a half. A Quiet Place focuses on two parents trying to take care of their child in a post-apocalyptic world filled with killer alien creatures that attack anything that makes a sound. The film an interesting approach to horror writing and plays on the idea of noises spectacularly.

The final chapter to the Resident Evil series is a solid way to wrap up the franchise after countless incredible films. It takes all of the buildup from a half dozen previous entries in the series and runs all the way back to themes from the very first installment with a fairly open ending that leaves a possibility for a return down the road.

Ellen Page has shown a vast range of talents across her acting career, from roles in Trailer Park Boys, Juno, The Umbrella Academy and more, but The Cured adds even more to her repertoire with some twisted zombie vibes. The flick focuses on a plague that turns people into murderers. After a cure is found, there’s distrust left between those who have and have not been infected before.

A remake of Eli Roth’s original 2002 film, Cabin Fever is a fun way to picture what it would be like to discover that a flesh-eating disease is wreaking havoc while on a vacation. A group of college students go on a trip in the woods when they discover the contagion and spend their time trying to figure out what it is and how they should deal with their new situation.

Read more: A zombie horror movie about coronavirus is already out and it’s awful
Freaks (2018)

Freaks brings out a truly original concept in horror with a 7-year-old girl who hasn’t interacted with the public before. Once she steps outside, she discovers she has telepathic powers. There’s a solid mix of government conspiracy, supernatural elements and more to make for a fun thriller that isn’t just filled with gore to shock audiences.

Available on: Hulu with SHOWTIME

Panic Room was an incredibly written and suspenseful thriller, and its star-studded cast with Jodie Foster, Jared Leto, Forest Whitaker, Kristen Stewart and more made it all the better. While not particularly relatable given the wealth of the main characters, it’s captivating watching the power struggle between hostages and robbers, which takes a dark twist when things start going wrong with the heist plan.

Available on: Hulu with STARZ

Shaun Of The Dead is one of the greatest zombie movies as well as one of the best comedic horror flicks ever made. It takes all the greatness of George A. Romero’s classic zombie pictures that established the genre and crams it into a hilarious spin that ended up pushing zombies further into the mainstream.

While it wasn’t executed quite as well as most would’ve liked, The Purge is a worthwhile film to watch to see a completely wild societal experiment. With nothing being illegal for 24 hours, countless crimes take place, and seeing a fake narrative of how that could potentially play out in real life started a whole series that played off a fantastic theory.

The remake of Romero’s best zombie flick and arguably the greatest in the genre does a masterful job of honoring the iconic movie while standing on its own. The mall-set film became a hallmark of zombie cinema for a whole new generation while paying homage to everything that came before it.

Watching a zombie movie from a first-person view is an interesting way to put a fresh spin on the genre. Pandemic does it well while having a solid storyline to carry it beyond that trick as it follows the early days of a worldwide pandemic that turns people into flesh-eating zombies. As most people know, the very beginning of an outbreak in a good zombie picture is the most captivating part as we all wonder what we would personally do in those situations.

Silly name aside, The Midnight Meat Train is one of the scariest films you’ll ever see. The movie is based on a short story by Clive Barker about a photographer searching for a serial killer who murders on the subway system. After some dark and very bloody investigative work, a sci-fi twist is thrown in at the end that will completely catch you off guard.

Learning about a disease taking over the world is scary enough, but when that terror creeps up on your doorstep, things get real, and that’s the focus of Antisocial. It focuses on a group of college students who discover a disease is causing people to become uncontrollably violent. As they see the reports on TV, they quickly discover the disease is happening right in front of them.

The Descent was one of the most innovative horror films to come out of the 2000s, with a focus on surviving attacks from creepy humanoid creatures in an underground cave system. Six women get trapped in a cave, and while finding their way out, they discover truly horrific things living in the caves as they slowly get picked off one by one.

Horror comedy Mom And Dad is fun to watch once you get past the ridiculous way parents are turned into killers. A TV signal transforms parents into murderers who want to specifically kill their children, and Nicolas Cage’s performance really brings the funny elements together with the scary bits for a fresh story idea.

If you haven’t watched any of the Hellraiser films, there’s no better time to learn about one of the hallmarks of horror than now. Even if you’ve seen it before, the original is a great one to revisit with the ultra-terrifying Pinhead presenting some supernatural scariness that will keep you up at night.

Midsommar is one of the big breakout films from horror in the past decade. It captivated audiences with its cult-focused storyline built on emotional journeys and massive twists that will make you return to it again and again to fully grasp everything going on in the story.

Before the new remake arrives, you should definitely check out the original Candyman. The film is one of the all-time greats in horror cinema with a story of a ghost that kills anyone who questions his existence. He’s a terrifying presence with bees crawling from his skin and is summoned by saying his name in a mirror five times. He doesn’t exactly present himself as a villain, though, which puts a fun spin on horror.

Bird Box became a viral sensation when it arrived on Netflix in 2018, and for good reason. The flick’s fresh concept of supernatural entities causing people who look at them to commit suicide is highly intriguing. The actors do an incredible job of making you relate to the characters while offering realistic plot points within a fictional tale.

Invasion Of The Body Snatchers (1956)

The original Invasion Of The Body Snatchers offers up a black and white telling of a horrifying sci-fi concept that’s so intriguing it’s led to numerous remakes. The creepy plot involves aliens who are able to duplicate any human, minus the ability to have emotions. It’s a scary idea to question whether someone is really who you think they are and this film took that concept to an incredible level marking itself as an all-time great within sci-fi horror.

This is how Post Malone’s cannabis brand Shaboink is helping relief...