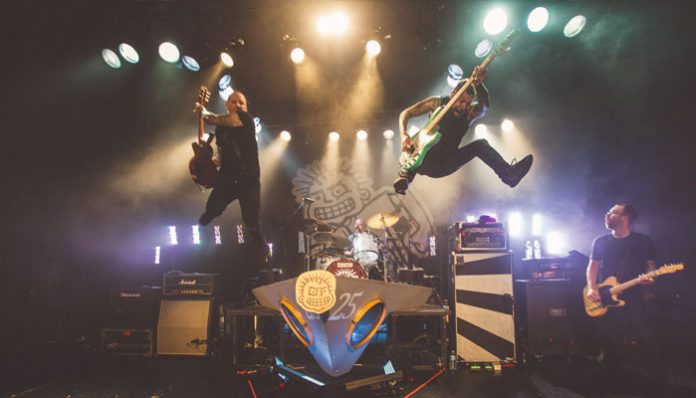 Pop-punk mavericks MxPx are doing their part to keep your lockdown as adrenaline-charged as possible. The long-running band will be streaming a deluxe edition of their 2018 self-titled record Tuesday April 14th (Monday night at midnight EST). This edition will include the full original 11-song album, four bonus tracks and five acoustic versions.

“We always expected to release the rest of these songs when the time was right,” says vocalist/bassist Mike Herrera. “I think with an almost full industry shutdown, this makes the most sense. It’s time to share all we have in the MxPx archives and start with a clean slate.”

In addition to this MxPx deluxe edition, Herrera is doing livestream performances from his home in Texas. The sessions, dubbed Life In Quarantine, may be seen every Friday at 6pm PST / 9pm EST on the MxPx Facebook page. Fans can also purchase Life In Quarantine-related merch and more at MxPx.com

In addition, Mike Herrera has released an acoustic solo record, Moments Like These: Texas. The record was recorded in the fall of 2019 over a series of solo shows. Moments is currently on all streaming platforms. A 10-inch vinyl version is also available direct from MxPx.com.

To help spread the word about all this sonic goodness, some of the band’s friends popped up from isolation and in front of their phones. Jaret Reddick of Bowling For Soup delivered a jingle announcing Moments Like These. But wait! Less Than Jake’s Chris Demakes chimed in with a spot of his own in support of the MxPx deluxe reissue. You can see them both after the tracklisting.

10 new songs from black artists who should already be on...

Here’s what Disney+ is offering for new shows and movies in...