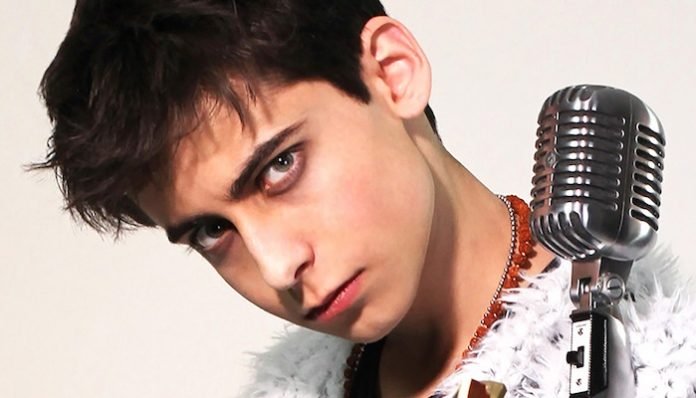 Aidan Gallagher is living his best life. In this “10 Topics” interview from AP 370, the fan favorite from The Umbrella Academy shared his thoughts about acting, music and what the world definitely can do without.

My parents took me to see U2 a long time ago with Black Eyed Peas opening. When we were driving to work at Paramount every day where my old show filmed, we’d rock out on our drive and listen to different types of music. Then I watched documentaries on all those rock stars, from Tom Petty to the Beatles. Being 15, bands like U2, Nirvana and Pearl Jam are classic rock to me.

I go through new bands all the time, so it’s constantly changing. I’ve found Mac Miller to be really inspirational. Right now, my favorite song is “Welcome To The Wonderful World Of” by LSD. The song has a lot of really cool production elements and goes through a lot of different sections. I think it’s the perfect way to start an album.

That Five is cold and uncaring. Five is just preoccupied with saving our civilization in just a few days, so he doesn’t feel he has the time to spare for politeness. This puts him in an extremely stressed-out frame of mind where he just doesn’t have time to talk to anyone or explain anything. The show captures him at critical moments, like when he needs coffee or tries to get something important done. But you can see he is still gentle and caring in his interactions with Vanya.

That was one of the coolest things that happened in my life. If anyone hasn’t read his comics, they need to because he’s absolutely a genius. I was a fan of MCR, so this was a dream come true for me. I first met him at the table read. It was amazing because I asked him for a selfie as his fan, and he asked me for a selfie for his daughter who is a fan of my old show on Nickelodeon. He was there the first day when I was filming my first scene with Ellen Page and just really starting to feel comfortable with my character. He told me I nailed it, and that meant the world to me, because I just wanted to do justice to Five. I then had the nerve to ask him to sign my comic books. He’s just the coolest guy in the world.

I’m such a fan of the comics. And I’m in the series adaptation! I don’t want to pick, so both. The show expands the world, and it takes 10 hours to figure out the backstories. I think comic fans can enjoy the show for in-depth perspective, and the show fans can get into the comics now and see that part, too. Both are great and complement each other.

Read more: Aidan Gallagher shares emotional “For You” music video
MUSICIANS WHO WOULD ROUND OUT THE AIDAN GALLAGHER TRIO.

Recently I tried out a backing band for my album debut show, but it wasn’t working right so I went solo. John Mayer, Ed Sheeran and Shawn Mendes make good cases for being solo artists, and I think that’s where I’m headed. Everyone who knows me knows I’m crazy about John Mayer, and he has a band of great musicians. If you stripped the songs down to just guitar and vocals, you’d see that [they] sustain themselves. My first fully self-engineered and produced song “For You” is coming out in June, and I’m really proud of it and can’t wait for everyone to hear it. I want to be judged based on that song because it’s 100% me in my garage: Everything else was engineered and co- produced by someone else in a big studio. I’m going to keep self-producing because I’m really careful and detail-oriented and need time to think things out.

THE ONE THING NO ONE WILL EVER GET YOU TO LIKE.

Plastic. Now that I know how it is polluting our world. But it’s nearly impossible to eliminate it in our daily lives. So I recommend reusable plastic only. Recycling is good. I bring a reusable bottle as much as I can, and I use metal and not plastic cutlery. I use a reusable shopping bag and try to live by the slogan: reduce, reuse, recycle.

I love acting. Especially when there is great writing. I started when I was 9, and I gave up everything for acting. I didn’t think I was going to be a big actor. It all just happened. I was actually trying to learn directing by working on sets. Acting is fun because you can express yourself and develop the characters in your own way. I like everything about the industry from how a project comes together, the tech stuff, the directing, the post work, all of it. I like being on sets and locations and working with the crew in every department. They all have really cool roles and contribute with unique skills.

The one that rips your heart out is the hardest one to write. I find I have to work my way into it: I warm up my voice and start playing for exercise, and then sometimes a new riff happens that’s cool, and I work to see what comes from it. A lot of times I just play my guitar and sing in the bathroom where the acoustics are good and not worry about trying to make something happen. Sometimes I get inspired and write stuff out. Or I get a part of song that I save for later.

There’s this guy Boyan Slat who is making a sifter machine to push the trash together and gather it up, and I hope it works. But there is plastic that already broke down into micro-plastics that sunk down and then just keeps spreading out. There’s no way to get to the trash that is below the ocean surface, and the fish are eating it and getting sick, and then we eat fish. It’s scary. The ocean makes almost 70% of our oxygen, and no one talks about that because too much money is made from catching fish and dumping trash in the ocean. The only thing we can do is stop making trash. That’s it. Just stop.

FIVE FALLING FOR DOLORES IF HE HADN’T TRAVELED THROUGH TIME AND SPACE.

Dolores is a product of Five being trapped in the apocalypse for 45 years and going crazy from loneliness. Imagine being all alone for a lifetime with no one else on Earth to talk to. If Five had never time traveled, he would have grown up and probably left the house in anger like the others. In the comics, he is hijacked by The Commission and spliced with the DNA of every top killer in history to make him the deadliest assassin alive. The series doesn’t really get into it like the comics, but he says to The Handler, “You made me a killer.” Five was born with a genius-level intellect, and he has a factual morality instead of an emotional one. I think if he had never time traveled, he could have become something great. But that’s my theory.

No secrets are safe in the final ‘13 Reasons Why’ season’s...