Home News Here’s which MCR song Kevin Smith says he would make into a... 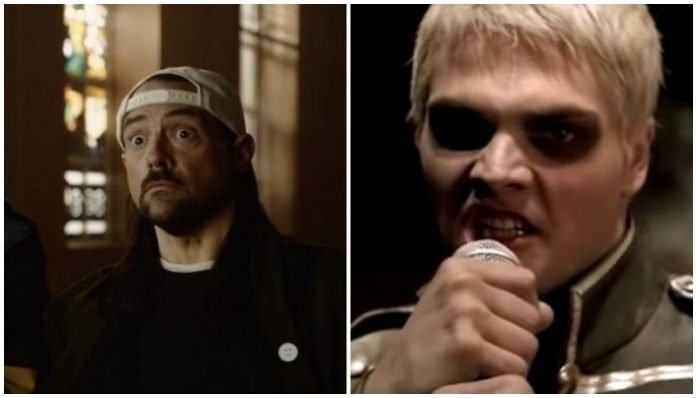 Beloved director Kevin Smith is a huge music fan and more specifically, he’s a fan of My Chemical Romance.

The director and film writer hosts a podcast called Fatman Beyond and in a recent episode he reveals a My Chemical Romance song as the one he would be most likely to turn into a film.

In the new episode titled “Live From The Quarantina,” he and co-host Marc Bernardin talk about how the COVID-19 coronavirus is impacting the entertainment industry and the entire world among other things.

A fan-submitted question poses if Smith could take any song and make a film based on its lyrics, which would it be and what would the plot be. From there, he has some words that will make My Chemical Romance fans pretty stoked.

“‘Welcome To The Black Parade’ by My Chemical Romance, MCR. Such an epic song. I’m building Clerks 3 around that song so this is actually a great question for me right now.”

In case you forgot, it was revealed back in October that Smith was tapping Gerard Way to score the upcoming third Clerks film.

According to Slash Film, writer and director Kevin Smith revealed the news while currently on the road promoting the Jay and Silent Bob Reboot.

The news follows Smith announcing the once-dead movie would be getting revived and was currently in development. You can see his post about that below.

3 CLERKS! Thanks to the good folks at @zscentertainment and @leeloomultiprops, I got to see Randal! #JeffAnderson, @jaymewes, and I spent Saturday signing stuff and catching up, seeing so much movie merch that’s been made over the last 25 years (hit the Leloo site for sweet signed skateboards)! But even better than that? We talked about making a movie together. It’ll be a movie that concludes a saga. It’ll be a movie about how you’re never too old to completely change your life. It’ll be a movie about how a decades-spanning friendship finally confronts the future. It’ll be a movie that brings us back to the beginning – a return to the cradle of civilization in the great state of #newjersey. It’ll be a movie that stars Jeff and @briancohalloran, with me and Jay in supporting roles. And it’ll be a movie called CLERKS III! To be great is to go on. To go on is to go far. To go far is to return. And we’re all gonna return to the scene of the crime! This won’t be the old script we almost made a few years back: this is a completely new screenplay that I just started writing last night! And so far, it’s like a dream come true! After mending fences with @benaffleck earlier this year, I was hoping for a chance to do the same with Jeff – so huge thanks to Leeloo Multiprops for getting us all in the same room. But the biggest thanks ever go to Jeff, for being receptive to the idea at all. This means I’m gonna get to play with my two favorite inaction figures again: Dante & Randal! Two weeks from the debut of @jayandsilentbob Reboot (on @fathomevents screens 10/15 & 10/17, link in my bio), I’m ecstatic to announce our imminent return to Quick Stop! So I assure you: we’re open! #KevinSmith #clerks3 #jaymewes #jayandsilentbob #danteandrandal #quickstop #leeloomultiprops #indiefilm #clerks

Prior to these recent connections between Smith and Gerard, he interviewed both of the Way brothers on his SModcast years ago. All three are from New Jersey so they share some commonalities beyond their general interests. You can check out his interview with them below.

You can hear the quote about the My Chemical Romance song around 116:30 into the podcast.

Would you watch a Kevin Smith-directed movie based on “Welcome To The Black Parade”? Let us know in the comments below.

Apparently this is what Macaulay Culkin is doing in ‘American Horror...