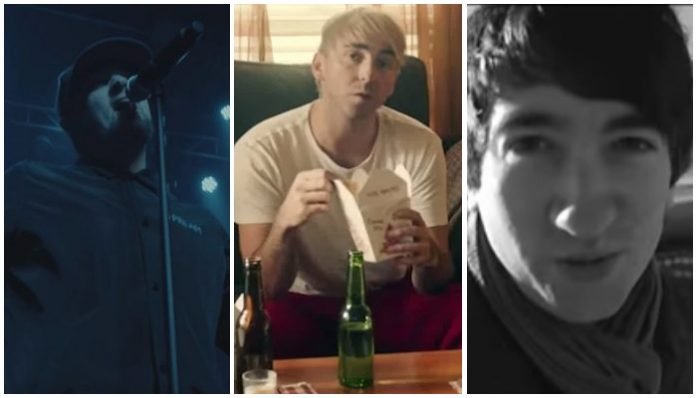 We’re well into this new temporary way of life of being stuck at home due to coronavirus. Retail stores, bars, restaurants and now movie theaters have closed their doors to the public. This means you’ve probably been sitting inside cycling through the same TV and movie options on Netflix and Hulu, as well as music playlists. However, there’s good news for film and music lovers. Many movies that were supposed to be in theaters will be moved to on-demand services for instant-viewing access. Additionally, several musicians are planning livestreams for fans to hear some stripped-down songs.

Check out the 7 livestreams and movies you should check out this week, and keep checking back as this list will be updated throughout the week.

Read more: Watch Tom DeLonge parody himself with a reply to “I Miss You” sing-along
Good Charlotte

Tune in to a Special Live & Unplugged set with Benji & Joel Madden as they perform Good Charlotte tunes and share some stories.

Benji and Joel Madden of Good Charlotte are bringing fans live and unplugged songs and stories from the road April 2. Joel also revealed they’re going to “play some stuff [they] haven’t played in years.” You can catch the livestream on GoodCharlotte.Veeps.com at 1 p.m. PST. All proceeds from the set will directly benefit efforts related to the coronavirus.

We’ve launched Listen In, a new series of exclusive playlists that connect artists with listeners ? From @AllTimeLow to @KianaLede, listen to the songs that are soundtracking their lives right now, inspiring them, or helping them focus on the positive: https://t.co/mUUHGMKFhO pic.twitter.com/fOujznqELO

Pandora wants to give listeners a truly unique experience inside the minds of their favorite artists through their new “Listen In” playlist series. You can listen to the current playlists created by the likes of H.E.R., All Time Low and Marshmello. Shannon Larkin and Tony Rombola of Godsmack even curated their own playlist of classic rock, including AC/DC, Led Zeppelin and Oasis.

A new CYCO STREAM is going LIVE today at noon PST a.k.a. in 3 hours from now! Thank you again everyone! It’s been so much fun sharing our STories and music with you!

Suicidal Tendencies are livestreaming songs and sharing tales from past performances with fans via Twitch. Fans can tune in March 31 at noon PST right here. Viewers even have the chance to interact directly with the band and ask questions during the broadcast.

Tomorrow on our Instagram, come hang out with us ? https://t.co/sxL3UcCSn6 pic.twitter.com/i28x3m7GO6

Plain White T’s are streaming a hangout session live via Instagram March 31. Fans can tune in at 7 p.m. EST to hear what the band are doing, ask some questions and hear some songs, of course.

The Fader is curing your music festival blues by streaming a two-day event featuring acts such as Noah Cyrus, Post Animal, Phantogram and many more. All acts have specific time slots where they will stream, and the performance will only be available for viewing for 24 hours. It’s running March 31 from 10 a.m. to 7 p.m. EST and April 1 during the same span of time. The entire lineup of artists, their time slots and streaming platforms are available here. The Fader Fort broadcast will also be a place to donate to various charities, including MusiCares and The Creator Fund.

What else do we have to do, go outside? Let’s drink tomorrow, that’s right west coast folks TWO O’CLOCK.

All Time Low want to raise a glass with their friends and fans April 1 for their “Everything Is Wine Happy Hour.” The band will be streaming on Twitch at 5 p.m. EST. They are even offering fans a special deal on free shipping for their signature red and white wines “Everything Is Wine” with the code ATLQuaranWine.

Get Ready! #SonicMovie is on Digital March 31 and on Blu-ray™ and 4K Ultra HD™ May 19. https://t.co/AfJlcB7jCd pic.twitter.com/08OkyGYDKO

Sonic The Hedgehog pushed back its original release date due to negative online comments based on Sonic’s facial features. In fact, these comments resulted in an entire redesign of the hedgehog. The feature film based on the famous video game character hit theaters Feb. 14 and has a star-studded cast, including James Marsden, Jim Carrey and Ben Schwartz as the voice of Sonic. Sonic The Hedgehog will now be debuting early for purchase on VOD, iTunes, Vudu, Google Play and Amazon Prime for $19.99 beginning March 31.

Could we be tasting this new Doritos Locos Taco flavor at...