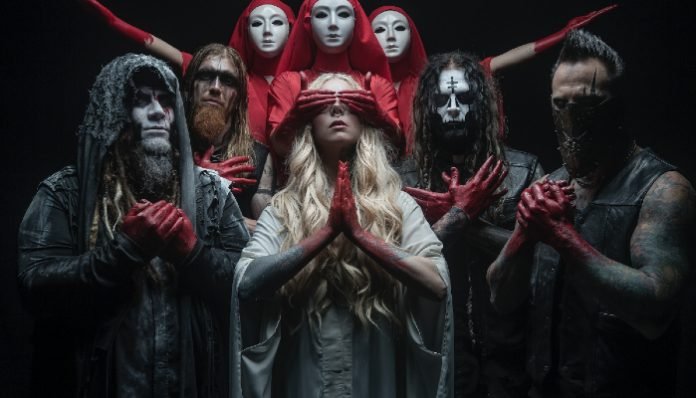 In This Moment are gearing up towards the release of their new album Mother and they’re giving fans a new track to check out today called “As Above So Below.”

The song comes after the band ended up dropping “Hunting Grounds” as well as “The In-Between” when they were revealing details for the album.

The heavy-metal units seventh record will be a followup to the beloved 2017 album Ritual.

were included in the AltPress 40 most anticipated albums of 2020 list and they certainly delivered on the hype with the first single “The In-Between.”

Then, last month they offered up another song from the album in the way of the groove-filled “Hunting Grounds.”

That track also features a guest spot from Ded vocalist Joe Cotela with a back-and-forth between him and ringleader Maria Brink.

Brink also recently performed her first set as a solo artist covering Billie Eilish and Radiohead on the ShipRocked cruise.

Now, they’re returning with another taste of what’s to come from the new album.

The band made a heartfelt post encouraging fans to find an escape with the new song during the ongoing coronavirus pandemic.

“AS ABOVE SO BELOW out now. Let us help you escape. Lose yourself in the music. We love you. We are all in this together 🙏 Streaming on all platforms now. #mother #asabovesobelow” the post reads.

AS ABOVE SO BELOW
out now . Let us help you escape . Lose yourself in the music .
We love you . We are all in this together 🙏 Streaming on all platforms now . #mother #asabovesobelow pic.twitter.com/pdGGLB8mJ7

You can check out the new track below.

In This Moment’s upcoming album is arriving on March. 27. It consists of 14 songs, one of which includes Lzzy Hale (Halestorm) and Taylor Momsen (the Pretty Reckless). A full tracklist is below. Mother is available for preorder here. Unfortunately, they’ve had to postpone their headlining tour with Black Veil Brides, DED and Raven Black due to the pandemic.

Mother Tracklist
“The Beginning — Interlude”
“Fly Like An Eagle”
“The Red Crusade — Interlude”
“The In-Between”
“Legacy”
“We Will Rock You” (Feat. Maria Brink, Lzzy Hale, and Taylor Momsen)
“Mother”
“As Above So Below”
“Born In Flames”
“God Is She”
“Holy Man”
“Hunting Grounds” (Feat. Joe Cotella of Ded)
“Lay Me Down”
“Into Dust

What do you think of the new In This Moment track? Let us know your thoughts in the comments below.

10 Christmas movies that weren’t supposed to be creepy

The Cure’s Simon Gallup forced to pull out of Austin City...