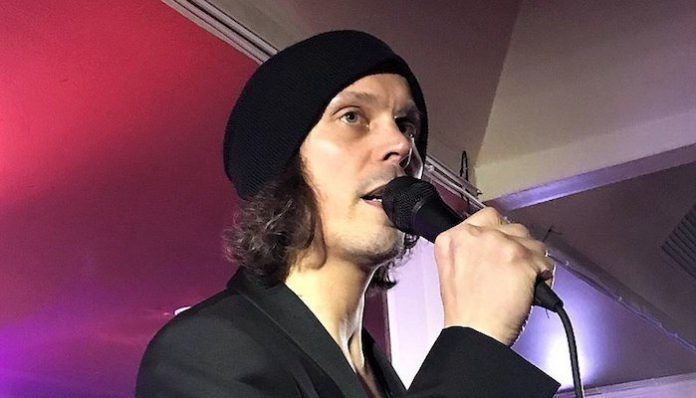 Ville Valo, the charismatic frontman for acclaimed goth-metal outfit HIM has dropped a new EP. Gothica Fennica Vol. 1 was released today, under the name VV. The three tracks on the EP are “Salute The Sanguine,” “Run Away From The Sun” and “Saturnine Saturnalia.”

The last HIM album, Tears On Tape, was released in 2013; the band split up four years later on New Years Eve 2017. Since then, Valo has popped up as a guest artist on many recordings.  He teamed up with the long-running Finnish band Agents, for a full-length release of folk music that couldn’t be further away from HIM’s dark-rock explorations. Valo has also worked with artists as diverse as the metal-centered classical outfit Apocalyptica, British goth band the Mission, Carcass’ Jeff Walker and Hanoi Rocks guitarist Andy McCoy. Valo worked on various film and music collaborations with Jackass star and skateboard legend, Bam Margera.

As the frontman of HIM, Valo cut a personality that wasn’t easy to ignore. HIM’s alloy of metal, goth and old-school glam appealed to many subgenres. Whether it was the glam proclivities or the well-burnished goth affectations against a Type O Negative vibe, Valo and HIM were bona fide rock stars at the turn of the century. New listeners might want to start with 2003’s Love Metal just to see what Valo and his bandmates were capable of, sonically.

No further information on Valo’s plans regarding Gothica Fennica Vol. 1 have been revealed. We suspect something will be announced soon. Why? The EP tracks are definitely where the singer is now, carrying a sense of optimism and melodic thrall. Check them out below.

“Run Away From The Sun”

Kanye West shares behind the scenes glimpse of ‘Jesus Is King’...

Tom DeLonge and blink-182 will play together again when the time...