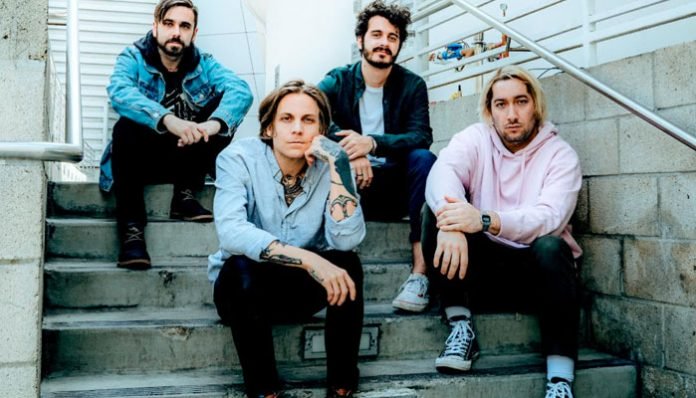 The last time Altpress took a big look at Broadside, we found them out in LA, doing all kinds of side hustles to pay the bills and keep their art untainted. We’re pleased to announce that Ollie Baxxter and team have hooked up with SharpTone Records and have released a new single, “Foolish Believer.”

“We’ve been working side by side with Shawn [Keith, label co-founder] for years and he has helped us out a great deal as our manager,” shares vocalist/Broadside vision-keeper Baxxter. “It feels more than natural to be signed to SharpTone for the next step of our career.“

Read more: Knuckle Puck: The oral history of EPs, LPs and friendship
Prior to departing Victory Records, Broadside issued a two-song single, “King Of Nothing” and “Empty” that further illustrated their future promise. (The latter song sounded like a coming-of-age movie the late director John Hughes forgot to make.) “Foolish Believer” finds the band in a good place, a testament to Baxxter’s unerring perserverence.

“When I was 11 years old, I would sit on the edge of my bed and look at the cheap Walmart mirror hanging on the back of my bedroom door and pity the reflection,” the Broadside founder remembers. “I realized at a young age I hated being alone even though I was incredibly good at it. Now, as an adult, I find myself chasing a dream that feels unattainable. I pay my own rent, I can afford a better mirror, but the reflection still feels the same. I just want to be remembered. That’s the moral of the song. It’s selfish, to dream as much as I do. But I’m sick of pretending I’m fine behind closed doors, I’m just not.

“I’ve always known struggle,” he resigns. “As I get older, it’s more mental than physical, but it’s always there.”

Check out “Foolish Believer” and let us know if you think this is Broadside’s year, below.

You can find out how alternative your Spotify listening habits are

Jaime Bennington is using meditation to become closer to Chester