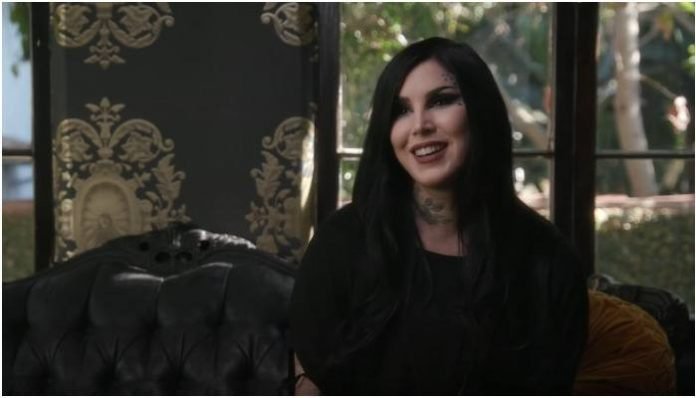 Kat Von D drew the ire of many in 2018 when she said that she would not be vaccinating her then-unborn child. Then in 2019, she took to YouTube to address the vaccine situation, among other things.

Now, the tattoo artist, makeup/fashion mogul addressed the vaccine situation again, confirming she’s “not an anti-vaxxer at all.”

Back in 2018, in a now-deleted Instagram post, Kat Von D posted about her pregnancy and said she did not plan on vaccinating her child.

If you don’t know what it’s like have people around you think you are ridiculous, try being openly vegan. And, if you don’t know what it’s like to have the entire world openly criticize, judge, throw uninformed opinions, and curse you – try being an openly pregnant vegan on Instagram, having a natural, drug-free home birth in water with a midwife and doula, who has the intention of raising a vegan child, without vaccinations.

The post immediately blew up and Kat Von D faced severe backlash over the anti-vaxx comment. Then, in 2019, Kat Von D took to YouTube to talk about how she’s not anti-vaxx saying she’s not an “anti-vaxxer” but just a “first-time mother.” That video is deleted as well.

Von D also recently made headlines for selling her shares in her makeup company that she started back in 2008.

The tattoo artist took to Instagram to announce her departure from the company. She states that even though she has so much going on, it’s OK to take a step back.

This past year has been one of great change for me. As many of you know, I gave birth to my beautiful baby boy, launched my vegan shoe line, and am now busy prepping to release my long awaited album in the Spring, followed by an international tour! As much as I wish I could balance all of this, on top of continuing my makeup line, it has become clear to me that I just can’t do everything at the maximum capacity. It’s hard to admit this, since I’ve always said “You can do everything and anything.” But I don’t think admitting one’s limits is a bad thing. With that said, I’ve decided to sell my shares of the brand, turning it over to Kendo, my partners for the past 11 years. This was not an easy decision, but after careful consideration, I decided I wanted the makeup line to continue to thrive and grow, and I believe Kendo is primed to do just that. The transition for you, my loyal customers, will be seamless. In order to avoid any confusion with such a big change, Kat Von D Beauty will take a moment to rebrand itself, so you will start noticing the change from KatVonD Beauty to KvD Vegan Beauty. I’d like to thank my beloved fans+followers who supported my vision to create a brand that stood for compassion, true artistry, and challenged modern ideals of beauty — most of which I never could relate to. I was able to create a makeup line that made outsiders like me feel like we have a place in this “beauty” world, and gave myself and others the tools to express ourselves in our own unique way, whether it was embraced by the majority or not. And I just couldn’t have done any of this without you! Lastly, thank you for understanding+respecting my choice, as it was a difficult one to make, but one I am proud of regardless, and am confident that the team will continue the KvD legacy! Here’s to many, many more years of KvD Vegan Beauty!

Now, Von D recently sat down with the Los Angeles Times and reconfirmed that she’s not against vaccines. She says she was merely “uninformed.”

“When it comes to the vaccine issue, I was six months pregnant at the time, and I was still trying to figure out my birthing plan to have my son. And, at the time, I made a completely thoughtless post on my Instagram on whether or not I would vaccinate my son. And, because of it, people think I’m something that I’m not. But the truth is, I’m not an anti-vaxxer at all.”

“I just made a mistake, and I was completely uninformed,” Von D adds. “It was stupid, and I really shouldn’t have opened my big mouth on the subject.”

Kat Von D also said that the controversy is not the reason she sold her shares in the makeup company. It’s also not the reason that her partner company Kendo renamed the brand. The new name KVD Vegan Beauty. Originally, it was Kat Von D Beauty. When Von D left she said the transition had been occurring for about a year before the announcement. She cited wanting to focus on other aspects of her career and she didn’t want to be part-way involved.

Read More: Green Day are punk’s greatest band—and we have the magazine to prove it

“We had already been deep in the trenches with lawyer stuff a year prior to this,” she says. “[Kat Von D Beauty] wasn’t something I could just pass on, just collecting a paycheck [for] signing off on things. I’m so painfully involved in everything and I do tend to micromanage — I’m sure Kendo can vouch for that — but that’s part of what made the brand beautiful. It was something that was hard for me I didn’t want to be deceitful to the public and say, ‘Hey, everything’s the same,’ when the reality of it is that I’m not going to be involved in any way.” The name change, she adds, “took a lot of compromise on their behalf.”

Von D plans to release her debut album later this spring. She gave her fans a sneak peek of one of the tracks a few weeks ago on social media.

What do you think of Kat Von D’s recent comments about her not being anti-vaxx? Tell us in the comments below.

Grayscale aren’t wasting any time during the pandemic