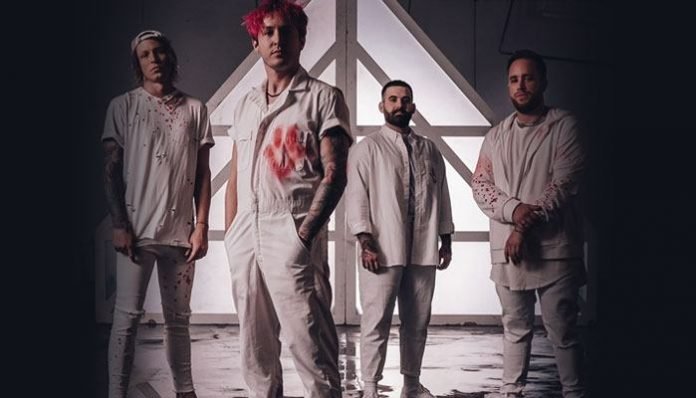 The Word Alive just faced one of the worst situations a touring band can go through with $10,000 worth of their belongings stolen but now they’re working towards earning back some of their losses.

The band are releasing an exclusive shirt to recoup their financial losses while giving thanks to the fans who continue supporting them.

On March 4, the band revealed they were robbed one night before the end of their tour. Lead singer Telle Smith spoke out on the robbery noting how frequently this happens to touring musicians. “It feels so shitty to be almost home from an amazing tour and to end on such a horrible note. The fact that it happens nonstop to artists trying to bring positivity city to city is so fucked.”

Following the first night of a two-night stint with Falling In Reverse, the Word Alive went to their Airbnb. The thieves stole the members’ personal items (cash, jewelry, laptops, clothes) as well as merch. They were playing two nights at the same venue so none of their equipment left the venue luckily.

“They stole practically everything of value inside the van,” frontman Telle Smith tells AP. “We never leave anything inside the van, but we were playing two nights and the tour ends tonight. We were packing the van to prepare to go home.”

We were broken into and robbed last night, it feels so shitty to be almost home from an amazing tour and to end on such a horrible note ?

The fact that it happens nonstop to artists trying to bring positivity city to city is so fucked ???

Smith said at the time they were working with MerchNow to see if they could create a specially designed shirt to offset the loss.

“We don’t want to go the GoFund Me route, so we’re seeing if MerchNow will allow us to do that.”

Now, they’ve made it happen with a new shirt designed to help them out financially.

You can see their post below and pick the shirt up here.

All proceeds go towards recovering from the theft we endured this week on tour, every shirt helps so much!

The Word Alive won’t be heading out on tour again until this June. “That’s the other insult to injury,” he says. “It’s not like we can go out and make it all back on tour. We have to wait a little bit.”

Witnesses or anyone with information about the crime are asked to contact the Sacramento Police Department.

Are you planning on buying one of the Word Alive’s new shirts? Let us know in the comments below.

Hear Caleb Shomo give this Motionless In White song a beat-heavy...