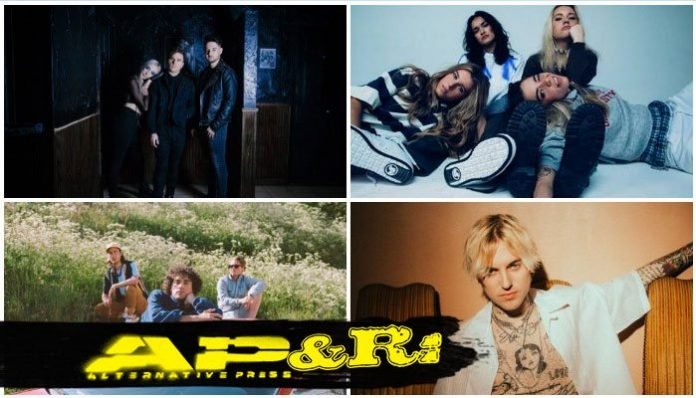 Read more: Logan Paul lip-syncs MCR after emo makeover and the scene is not happy

For fans of: Betty Who, LIGHTS and King Princess

Pop quartet the Aces are back to share their first single “Daydream” since their 2018 debut album, When My Heart Felt Volcanic. This simple, feel-good single is reminiscent of COIN and Tessa Violet, who also deliver catchy and unforgettable choruses throughout their pop hits. Though the song’s upbeat, there’s a bittersweet meaning behind it. “We want our fans to feel submerged in this music and walk away feeling closer to us than ever,” the band say. “‘Daydream’ is about what it’s like to be away from a loved one. When we’re on tour, we’re leaving a love note and memento saying, ‘I’m thinking of you, so daydream about me.’” The Aces will be performing at various festivals throughout the spring and summer, including Okeechobee Music and Arts Festival, Shaky Knees Music Festival and Hangout Music Festival. Ticket information can be found here.

For fans of: Super Whatevr, Doll Skin and RIVALS

Alternative-pop trio VISTA light up the music video stage in their new single, “Dirty Laundry.”  Powerful vocals and heavy riffs, reminiscent of fellow pop trio Halflives, can be found on The Repair, the second EP in the Trilogy era. The first EP, The Ruins, can be streamed here. Their final EP, The Revival, has no set date but will conclude the batch of releases.

For fans of: Lil Xtra, guardin and dying in designer

Grammy-nominated producer boyband shared his anime-themed music video “Death Note” featuring Good Charlotte’s Billy Martin. The young producer best known for working on Lil Nas X’s “Kick It” as well as offerings from rappers Young Thug and Gunna interacted with pop-punk guitarist on Twitter, leading the unlikely team to collaborate. “Death Note” is the perfect song for any fan of emo rap as well as viewers looking for a music video that takes inspiration from the series of the same name, featuring an artistic rendering of boyband as an anime character.

Emo rapper smrtdeath just signed with Epitaph Records and shared his brand-new single, “Back With Me,” chock-full of heavy 808s and a chorus you’ll want to belt along with. “‘Back with Me’ is a song about missing a relationship even though it was toxic,” the rapper says. Prior to this, he released hit singles “everything” and “madman,” boosting him to popularity in the rap scene.

For fans of: DREAMERS, Castlecomer and Nightly

Nashville indie-pop quartet Betcha collaborated with Brian Phillips (blink-182, Saint Motel, COIN) to create their lively single, “If That’s Alright.” The track is their first offering since the release of their highly acclaimed debut EP, FALLING, last year. “If That’s Alright” features a catchy chorus about pouring out love for someone who may or may not reciprocate the feeling and synths reminiscent of COIN and LANY. You can catch the band on tour this spring with fellow indie rockers WLDLFE. Tickets are available here.

For fans of: 27CLUB, GOLDN and Anthony Russo

Alternative, pop punk and hip-hop are just a couple of genres Jutes blends into his songs. As the follow-up single to “Everyone Knows,” Jutes shares compelling, heartbreaking lyrics over energetic trap beats for a unique emo-rap blend on “Where Are You Going?”. The track comes from his new EP, Overrated, via Capitol Records. You can stream the seven-song release here.

For fans of: Heart Attack Man, Boston Manor and Grayscale

Long Island pop-punkers MAKESHIFT are back with their new single “What’s Left Of Me” from their fourth record, Remember The Feeling, due out March 13. Preorders can be made here. Powerful chords and striking vocals make this a pop-punk song a perfect playlist addition for fans of Seaway and Boston Manor. “This song was written to portray the cycle of life, the feeling when you look back on everything you’ve done and wondering if you should stay on the path you’re on,” vocalist Dan Burke says. “Some days you wake up and can’t recognize the person you see in the mirror because of how much things have changed.”

For fans of: Of Mice & Men, Afterlife and Savage Hands

Italian metal band ELYNE recently shared their hardcore track “Light It Up” featuring Of Mice & Men vocalist Aaron Pauley. “We met Aaron in Italy when we shared the stage together with Of Mice & Men, so we had him listen to the song and asked if he’d be up to collaborate, and he came up with these amazing vocal lines and lyrics that were 100% perfect for the song,” vocalist Danny Metal says. “Light It Up” comes from the band’s brand-new record, Art Of Being Human, which is available here.

For fans of: Wallows, half•alive and MISSIO

Absofacto is best known for his song “Dissolve,” which found popularity on TikTok and went viral. Recently, he shared his airy synth-pop song “Lemon Drop” ahead of two other experimental pop tracks, “Python” and “Rewind.” Absofacto is heading out on tour and performing at summer festivals, including Bottlerock Napa and Firefly. Tickets are available here.

For fans of: Foster The People, Two Door Cinema Club and Phoenix

Norwegian pop-rock trio Great News shared their new track “Reality Show,” which will appear on their sophomore LP, Now And Them, out April 17. The song blends ’70s rhythms,  with dreamy lyrics meeting heavy guitars and bright choruses overtop modern-day pop beats. “It’s that story about the guy who doesn’t foresee the impact joining a reality show has for his future,” vocalist Even Kjelby says. “He’s also bitter because he realizes that the whole world watched him make all these bad decisions. And that’s what he’ll forever be known for. The dude who had sex on TV.”

There won’t be a San Diego Comic-Con for the first time...