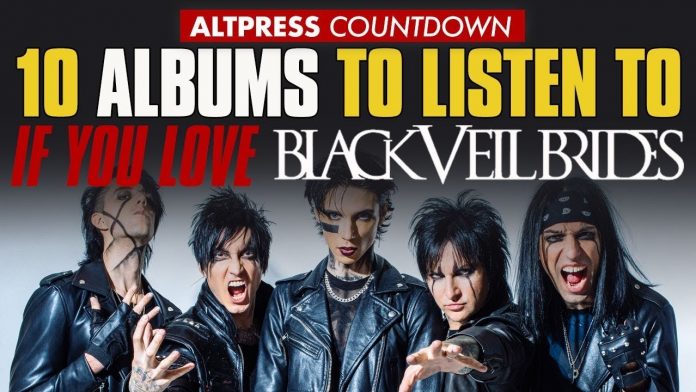 When Black Veil Brides’ lineup began to congeal in Los Angeles in 2009, they were essentially a sonic amoeba undulating. At first glance, there were obvious trappings of heavy metal and ’80s hair-farmer rock. But there were also plenty of next-gen signifiers of turn-of-the-century punk, from AFI to Social Distortion.

Real talk? We can make references all day about this stuff. But it’s never going to be as righteous as cranking these bands up and letting them cajole you into whatever greatness you may aspire to. Black Veil Brides have distilled the essence of arena rock with the stridency of punk, and that amoeba is now a 103-db ball of whirling plasma.

Fans familiar with Andy Biersack’s mythology are well versed in what the soundtrack to his escapism. From his Midwest roots in Cincinnati, Ohio, to his arrival in L.A., Biersack sought out the stuff that made him feel heroic. From the Springsteen disc his mom left in the car when she sold it to him to Davey Havok’s black-winged angel songs, Biersack has always wanted to pay that power forward. Some of those fuel sources are on this very list.

Read more: Black Veil Brides to support In This Moment on 2020 tour

We’ve also listed a few tangential albums that have informed BVB’s stead. While we can’t ascertain if Biersack and co. are fans of them, we do hear similar hard-charging intentions. There’s Yngwie Malmsteen’s fretboard gymnastics and Dirty Honey’s bruising blues. These elements are certainly felt in Black Veil Brides’ ongoing rock offensive.

Black Veil Brides have been hardwired by some of the most worshipped hard-rock bands on the planet. These are the bands who were soldering their intentions to the motives of BVB. Don’t look away: ears forward.

In This Moment drop synth-heavy track “As Above So Below”