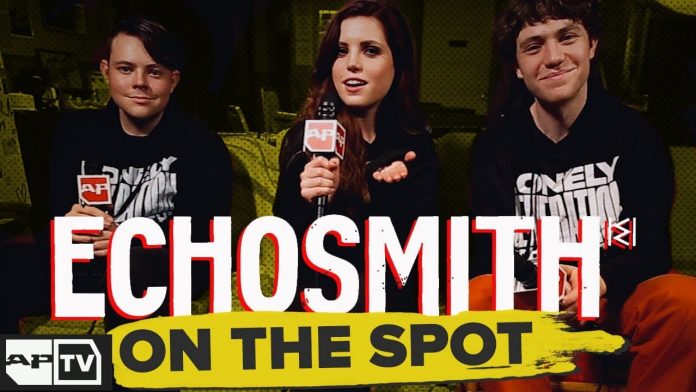 What did APTV’s Bobby Makar ask when he cornered pop sensations Echosmith backstage at Cleveland’s Beachland Ballroom? You’d be surprised. Given the nature of our “On The Spot” segments, there’s always the potential that things could get awkward.

Turns out that the Sierota family of Sydney (vocals), Noah (bass) and Graham (drums) didn’t have to dodge any kind of bullets. They opened up on everything from who their second-favorite bands are, as well as offering advice for potential Echosmith cover bands on how to pick a good name. (“It has to be cheesy,” Noah stresses.)

Read more: You, Me And Everyone We Know feel “F.I.N.E.” on new single

It’s not all fun and games, though. They talk about the making of Lonely Generation and how the fan response to it was worth all of the travails they went through. Echosmith also talk about the greatest challenge facing young people today. No, it had nothing to do with obtaining My Chemical Romance tickets. But still quite important.

Team Echosmith drop some jaw-dropping WTF moments, as well. Did you ever hear the story about how the noisiest Christian hardcore band on Warped Tour took a shining to them? Sydney does wax eloquently about her band’s stint on the tour and enjoying the experience massively.

Near the end of the clip, it looked like we may have started a fight with them. Secrets were spilled, which made Sydney wonder if open-book living was a good plan for her. We also discovered how tiny misconceptions about the band bordered on pet peeves. But at the end of the day, the members of Echosmith were lively, forthcoming and a lot of fun to be with.

APTV’s On The Spot: More fun than a heaping bowl of whipped cream.

There won’t be a San Diego Comic-Con for the first time...