Batman #86 sees the dawn of a new day in Gotham City. Gone is the rule of Bane and order has been restored. Also, the era of Tom King has passed as the new writer of Batman, James Tynion IV, takes over chronicling the adventures of Gotham’s Dark Knight. In the wake of the historic King run it falls on Tynion to pick up the pieces left in the wake of the City of Bane and the final confrontation between Bruce and an alternate world’s Thomas Wayne and without surprise he does a commendable job.

Gotham City has been through a lot over the past few years and it is time to rebuild. Both the city itself and the trust between the citizens and their Dark Knight protector need some restructuring and improvements. While Bruce Wayne has used his money and political influence to fast tracked much of the rebuilding efforts, he and Selina Kyle are also pressing the billionaire elite to open up their checkbooks and place their faith in the construction and revitalization of Gotham City and its citizens. Yet this is Gotham and trouble is never far away and Batman is still needed and he is on the trail of a meeting of five criminals, led by Deathstroke, who of course have dark motives. Batman has pressed Lucius Fox into service as his technological and overwatch partner in the wake of the murder of Alfred Pennyworth. Lucius seems less than willing to be in the position but understands the importance of this role and that even though he won’t admit it Bruce is still reeling from the loss of his father figure and it’s affecting his ability to be the best Batman he can be. Yet crime doesn’t stop for a morning period and the Batman must push on even though losing Alfred is on par with him losing his parents, and we all know how that affected Bruce. Tynion adds another back up tale which continues the return of the Joker to the pages of Batman, and it does a wonderful job of building anticipation for this eventual confrontation. 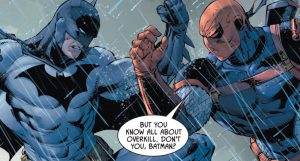 The Dark Knight Vs. Deathstroke the Terminator : Round 1!

I was a big fan of the Tom King era of Batman and I was sad to see him leave the title, even though we will get more King Batman on Batman & Catwoman in the near future, but I am also looking forward to what James Tynion IV has planned. I found Tynion’s Detective Comics to be one of the best books coming out of the DC Comics Rebirth and it’s nice to see his return to the adventures of the Dark Knight. With years of experience as a co-writer or fill in writer on a plethora of Batman titles and then the before mentioned stellar Detective Comics Tynion has an excellent grasp of who Batman and Bruce Wayne are and it shows in Batman #86. Adding Tony Daniel was another added bonus as his artwork is some of the best in the business right now with its realism and detail. With Daniel on this arc and then the amazing Jorge Jimenez joining Tynion with the next arc Batman is in truly incredible hands and there are great things to come.

Verdict: Batman #86 is an excellent first issue of the new creative team. Picking up where Tom King left off James Tynion IV and Tony Daniel have crafted an excellent Batman story and set up what will hopefully be another incredible run for Batman.