Batwoman is Back on the streets of Gotham

I loved Batman: Year One and the Dark Knight Returns  when they were first released. While Batman had moved away from its ‘60s campiness in the ‘70s it wasn’t until Miller came along that the Dark Knight truly became dark and grim. It was exactly what Batman needed and I couldn’t get enough of it. Luckily DC was experimenting with collecting their books into trade paperbacks and I quickly tore through my copies as I read them again and again. It was, in my opinion, a truly great beginning and ending of the story of Batman. I didn’t care about continuity and where it all fit. They were just damn good Batman stories and ones that I would come back to time and time again. Miller went off to Dark Horse and began Sin City, his long running series of mini-series and his ambitious 300. But money lured Miller back to DC and 15 years after DKR its follow up the Dark Knight Strikes Again (DK2) hit the shelves and it was a nothing less than a disappointment. Miller widened his scope, bringing in the larger pantheon of DC heroes but the book was hard to follow and did not have the same impact as its predecessor had. It may have been my age or it may have been Miller’s ideological turns (or my own) but I didn’t enjoy his Batman like I had when I was younger. I’d hoped it was the end but then All-Star Batman happened and I couldn’t pass up Jim Lee Batman art…. I wish I would have as I don’t know if I had read a more convoluted mess of a book that was not only bad but offensive as well. Miller later placed All Star in the DKR universe so it has become part of the larger DKR tapestry.  I tried to sit out the third volume of the Dark Knight, the Dark Knight III: the Master Race (DK III),  when it was first released but with Brian Azzarello on board as co-writer and Andy Kubert handling the artwork I finally succumbed and read it when collected and I will say it was better than DK2, no doubt due to Azzarello. I still didn’t love it but I enjoyed it for what it was but it again felt like a diminished sequel to the original. Miller and Azzarello released another book with John Romita Jr., a prequel to the original titled the Dark Knight Returns: the Last Crusade that was interesting but still not great. Yet Miller has stated these books weren’t the end, that he appreciated what Azzarello had done but that he would do a fourth volume that would wrap up his entire Dark Knight saga and now fresh off his recent Superman Year One (also set in the DKR universe) we possibly get the precursor to that with the Dark Knight Returns: the Golden Child, which if anything will be my last foray into the DKR world, even if DC lets Miller continue. 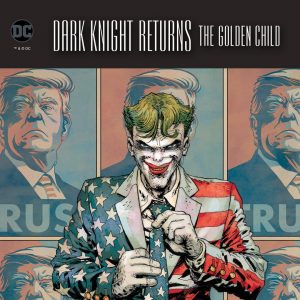 Trump has the Joker’s Endorsement … of Course he Does

The Dark Knight Returns: the Golden Child (DKGC) is nothing less than an unmitigated mess. Set a few years after DKIII Carrie Kelley is firmly entrenched in her Batwoman identity (with an incredibly spectacular costume in one of the few positives of this book) and leading the Batboys against the Joker mobs. Lara and Jon Kent (the children of Superman and Wonder Woman) are still trying to figure out humanity and their father’s fascination with it. Lara is a still an impulsive unlikable character (as sadly many of Miller’s female characters are depicted as) and Jon is distant and treated as an outsider who is incredibly powerful and falls flat in characterization. Donald Trump is running for reelection and is of course supported by what we can only assume is a new Joker since the original died in DKR. This actually make sense in my liberal mind but they the Joker is propped up by Darkseid which is never explained and leads to some bad storytelling as Lara and Jon deal with the lord of Apokolips Batwoman and her Batboys handle the Joker and his minions. The story falls apart pretty quickly as the villains and their alliance is never explained other than Darkseid wants Jon. As to how Trump became a pawn of the Joker, no clarity is ever given. Miller tries to draw parallels to recent pro-democracy riots but he never reaches the social commentary he wants to. While the book has some great action sequences they are confusing and while I think Miller is trying to make a statement that we need to start thinking for ourselves when it comes to politics and freedom and to not just buy into leaders and drink in their words like Kool-Aid. At least that is what I would like to think he wants the reader to take away but as I stated earlier, he just doesn’t get to where he wants to be when it comes to his storytelling. 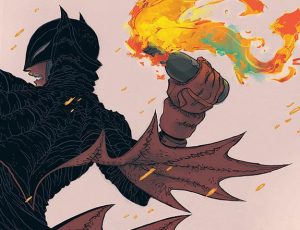 Never be Afraid to Question Authority or Take to the Streets!

There’s no denying that Frank Miller is a legend of the comic industry and is responsible for some truly incredible stories. But sadly, his most recent outings in the DKR universe have fallen flat and the Dark Knight Returns: the Golden Child is no different. The story is a mess with far too many assumptions for the reader to make without context nor explanation. The one saving grace for DKGC is Rafael Grampa whose artwork is beautiful. His panel layout is outstanding and his characters have a European sensibility (yes I know he is Brazilian) yet has an American panache for superhero action scenes. Sadly though Miller’s writing is so heavy that on many pages Grampa’s artwork is blocked out by dialogue box after dialogue box. Miller’s writing has also devolved into a noir style with short sentences that are heavy with bolded words and punctuation. It’s a hard read but luckily it’s pretty as you force your way through the book.

Verdict: Pass. The Dark Knight Returns: the Golden Child is a mess of a book and hopefully the sad final chapter of Frank Miller’s once grand masterpiece. While Rafael Grampa’s work is incredible it cannot save this book from the disaster that it was.