Professor X is dead. Assassinated by a group of augmented humans who penetrated the mutant nation of Krakoa by grafting skin from the mutant Domino onto their bodies to fool the biological defense system monitored by the mutant Black Tom Cassidy. There seems nothing worse for the young nation for its clear leader to be slain while the country is still in its infancy. Yet with the resurrection capabilities of Krakoa is anyone really dead? And with Wolverine and Kid Omega on the trail of the killers will this ever happen again? These are the questions that X-Force #2 asks.

The death of Professor X has reverberated throughout the entirety of the Dawn of X titles yet it feels like X-Force is the book that is going to deal directly with not just the act but also the repercussions and the retribution. This makes sense since X-Force has always been the militant wing of the X-Men universe and in later incarnations as the mutant strikeforce willing to take on dangerous and unpopular missions. X-Force #2 picks up in the wake of the violence of the first issue. There are two main threads for this issue. One deals with Hank McCoy (Beast) attempting to rebuild and update Cerebro so that Professor X can not only be revived through the Krakoan resurrection process but also so that the entire depository of Mutant mind backups that allows for mutants to be revived with all their memories restored. Hank McCoy seems the logical mutant to rebuild Cerebro with his high intelligence and scientific mindset yet it is interesting to see how he adapts to Kroakoan biological science, which is just an incredibly cool aspect of the new mutant status quo in the Marvel universe. The second part of X-Force #2 deals with Wolverine hunting down the source of the assassination squad. It’s nice to see a return of the violent Wolverine of years past but what is truly special about this outing is the odd pairing of Wolverine and Quentin Quire (Kid Omega). It’s been since Wolverine and the X-Men that Quentin Quire was a pain in Wolverine’s ass and it’s nice to see that Quinton can still easily get under Wolverine’s skin. These two are the highlight of the issue and I truly hope that this relationship is the centerpiece of what X-Force will be going forward, as that is a book I would look forward to every month. 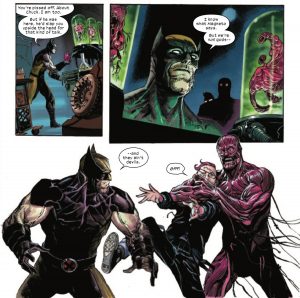 While I enjoyed the first two issues of X-Force I am stumped as to what this book wants to be. While I am enjoying what Benjamin Percy and Joshua Cassara are giving us I’m not sure what it is yet. Usually within the first two issues of a team book you start to see the formation of what the book and team is going to look like, yet not here. I know that Wolverine is going to be central to this book but is it going to be a clandestine team in the vein of Remender’s wonderful the Uncanny X-Force or is it going to the militant wing of the Mutant world like its original incarnation under Rob Liefeld. I can’t tell if this book is going to take one of these two courses or if it’s going to be more focused on the behind the scene machinations of Krakoa with its seedier side with characters like Black Tom Cassidy taking the lead. Or is it going to be the book that takes on the human threat, whether overtly or covertly? Maybe it could be all three. Right now the book feels a bit rudderless, that it is all over the place yet hopefully its scope and focus will become more apparent over the course of the next few issues. All I can say is that I am entertained enough that I will give X-Force a chance to find its footing, since it has the potential to be a hell of a fun ride.

Verdict: Buy for hardcore X-Men fans and those interested in all things Krakoa. It’s not a book for everyone but has the potential to be one of the most interesting Dawn of X’s title once it figures out what it wants to be.