Billie Eilish just teased two new songs and a “xanny” music video were on the way this week. But thanks to Jack White label Third Man Records, we won’t have to wait too much longer for some material.

The alt-pop sensation headed to White’s label studio in Nashville Wednesday with brother and collaborator FINNEAS. Known for her elaborate stage setup, the artist stripped back her performance for the secret show in the 250-capacity Blue Room.

Read more: My Chemical Romance: At the end of the Black Parade route—interview

White was in attendance for the sold-out event, introducing Eilish as “someone we really love who we think is really innovative and inspiring,” according to Rolling Stone.

According to the outlet, she performed a 40-minute set, which included “idontwannabeyouanymore” off her 2017 don’t smile at me EP and 2018 single “come out and play.” She also highlighted several tracks off her debut WHEN WE ALL FALL ASLEEP, WHERE DO WE GO such as “all the good girls go to hell” and “bury a friend.”

The singer also played through “bad guy,” botching the first chorus lyrics, which will be pressed into the live album given the recording process.

As her set came to a close, Eilish thanked White directly. “Thank you so much to Jack White for having us here and inspiring a whole generation of people to do what they want,” she said.

Following the performance, Third Man Records revealed the pressing will be available at their two retail locations in Nashville and Detroit only next month.

Thank you @billieeilish and @finneas for the amazing intimate show in the Blue Room tonight. Fans, this was recorded direct-to-acetate and will be available on LP via #ThirdManRecords retail locations only (Nashville and Detroit) next month. Stay tuned… pic.twitter.com/4e1HxeHTc3

First launched in 2013, The Shins, The Kills, and Seasick Steve marked the inaugural releases using this technique. The process omits overdubbing or editing, mixing in realtime on a Rupert Neve 5008 console.

You can see some footage of “wish you were gay,” “i love you,” “Ocean Eyes” and more from those who were in attendance below. 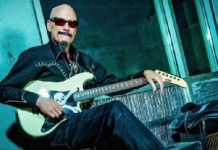 In This Moment drop synth-heavy track “As Above So Below”

Mindy Kaling says Emmy organisers tried to cut her from ‘The...