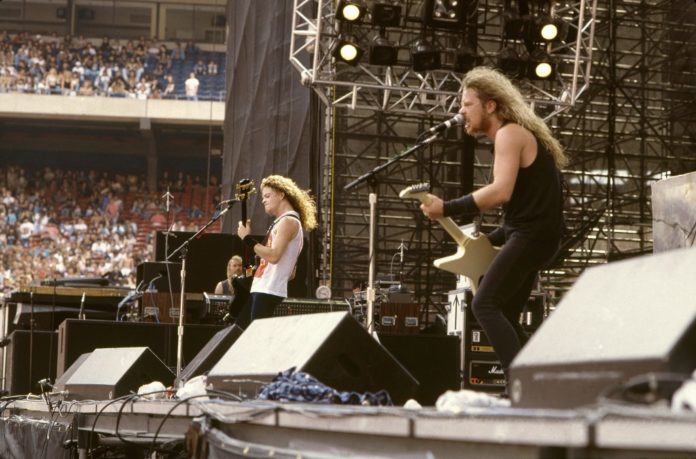 “I had to come in and be that propulsion”

Metallica’s former bassist Jason Newsted has said that he helped support and steer the band to success when he replaced their bandmember who died in a tragic accident in 1986.

The musician, who was in the line-up until 2001, said he “would like to take some credit” for the “stabilisation” of the band in the wake of Cliff Burton’s death. Burton, who played on Metallica’s first three studio albums, died aged 24 in a tour bus crash on September 27, 1986.

Now, speaking to Florida radio station WZZR (Real Radio 94.3) Newsted says he provided crucial support as the band were grieving for their friend.

“The stabilisation of the band I would like to take some credit for,” Newsted said. “Yes, it was hard work; yes, it’s not for everyone; but, holy crap, what we were able to accomplish. Because we had the right combination of people at the right time and the right amount of people to go play for in the world.


“It was all demographics and politics and all those things that got us to where we were.” [via Blabbermouth.net]

“The hard work that went into that and the foundation and stability that it created after such a fracturing because of Cliff’s passing… They would have just as soon not done anything else once that happened,” he continued. “But they didn’t, and they kept going, and I had to come in and be that propulsion, be the new engine that helped this fractured being. ‘Cause it’s a thing that’s bigger than all of [us]. It’s an entity unto itself.

“So those years that I did it was just stabilising the whole thing. Fifteen years later, it was stabilisation. So that’s what I was able to be. I showed up — first one in, last one out. I always went with that kind of mentality. That’s why it got to where it got. That’s how heavy metal of that sharp tooth was able to get on the radio.”

Newsted added that his sudden departure from the band in 2001 “enabled” the band to continue. “They would not be doing what they’re doing now if I hadn’t made that move then and I knew what was best for everybody at the time,” he said. “Whether I was prophetic and saw these things ahead of time, that I knew the inner rumblings, what would take place and what would unfold… I knew about people’s issues and stuff,” Newsted said in reference to the near-disintegration of the legendary band while making their eight studio album, ‘St. Anger’ (2003).

However, the musician – a former Flotsam and Jetsam bandmember who fronted his own project NEWSTED from 2012-2014 – didn’t take, well, all the credit.

“I’ll always be a member of Metallica but it’s his former bandmates who are ‘gonna do the work’ — they’re gonna go out there and do their thing, and I’m just gonna fly the flag and always be proud of them.”

In related news, the band’s frontman James Hetfield recently returning to rehab after “struggling with addiction on and off for many years”. Metallica have postponed their tour of Australia and New Zealand while Hetfield receives treatment.