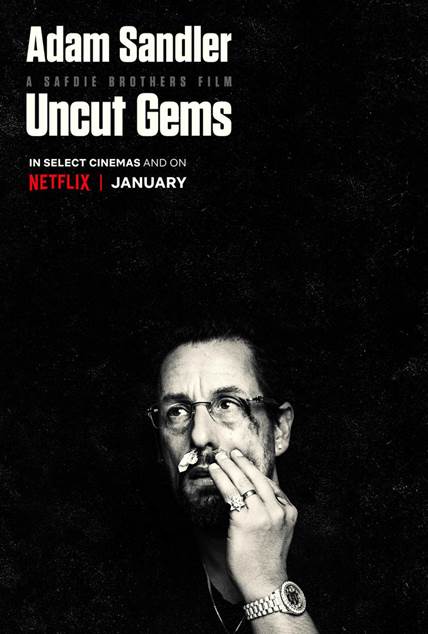 Uncut Gems, the new Adam Sandler and The Weeknd film, will come to select UK cinemas and Netflix in January.

The film was announced back in July, and had a surprise UK premiere last night (October 9) as part of the London Film Festival.

Announced back in July, the Safdie brothers film is set in Manhattan’s diamond district and centres around charismatic jeweller Howard Ratner, played by Sandler.

“When he makes a series of high-stakes bets that could lead to the windfall of a lifetime, Howard must perform a precarious high-wire act, balancing business, family, and encroaching adversaries on all sides, in his relentless pursuit of the ultimate win”, TIFF’s official description of the film reads.


Along with details of the UK release date, a new poster for the film has been shared. See that below.

The soundtrack to Uncut Gems is set to be provided by experimental producer Oneohtrix Point Never. It has also been reported that OPN – real name Daniel Lopatin – and The Weeknd recorded music together for the soundtrack, but it didn’t make the cut.

Last month, a trailer was released for Uncut Gems which saw Sandler and The Weeknd squaring up to each other.

In advance of the film’s release, Adam Sandler covered Taylor Swift track ‘Lover’ with his daughters and performed with Eddie Vedder at a recent fundraiser in Los Angeles that he and Vedder were hosting.

Do you remember Hayley Williams’ hair color in these Paramore videos?

The Faim call it a draw, guiding their frontman through APTV’s...