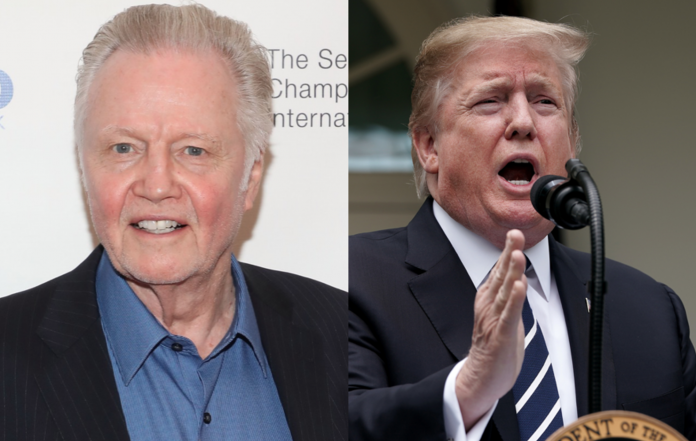 “This is a crime that the left are trying to force”

As Democrats launch a formal inquiry into whether or not Trump should be impeached, the Academy Award-winning actor is once again coming to his defence.

Voight, who has appeared in movies such as Varsity Blues, National Treasure, Pearl Harbor, Transformers and more, posted a video to Twitter on Friday (September 27) simply titled “This is war.”

The star, who is the father of actress Angelina Jolie and has won Oscars for his roles in Coming Home and Midnight Cowboy, began the video by saying: “War. This is war against truths. This is a war against the highest noble man who has defended our country, and made us safe and great again. Let me stand with our president. Let us all stand with our President Trump in a time of such evil words trying for impeachment.”


“This is a crime that the left are trying to force,” he adds. “This is a disgrace by such ignorant followers that have no truth of what truly has been brought back to our country.

“This radical left are destructive. Their codes of what is supposed to be are corrupt with lies, deceits, and anger, and we ask why? We ask how can a human being have such anger towards the greatness of our country’s glory. I’ll tell you why: because for so long their anger has been growing, and with such deep pain, with no open heart, of loving and seeing the truth.”

Watch the video below:

This is not the first time Voight has publicly shown support for the president. Earlier this year, the actor urged Americans to “stand with our president” in a video message. He also proclaimed that Trump was the “greatest president since Abraham Lincoln.”

A long-time supporter of Trump, Voight, in March, was appointed a trustee of the John F. Kennedy Center for the Performing Arts, serving through 2024, by the president.

Meanwhile, The Rolling Stones‘ Mick Jagger has condemned Donald Trump over his stance on climate change, while accusing the President and Prime Minister Boris Johnson of “lying” to the public.

Black Veil Brides fans should listen to these 10 records