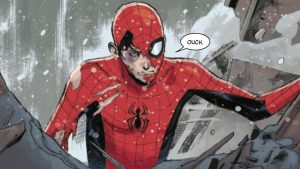 Things Have Been Better for Spider-Man

Anyone expecting another Peter Parker Spider-Man story should move right along as they will not find that in Spider-Man #1. Anyone looking for yet another alternate universe story where Spider-Man and Mary Jane have a child who grows up to possess Spider like powers then Spider-Man #1 is for you. Anyone looking for new and untapped stories may want to check out Image. Now that may sound condescending but after the hype and build up to JJ Abrams writing a Spider-Man story with his son with the amazing Sara Pichelli on art I was expecting something special. Instead we get a good story with great artwork but nothing new or original and honestly this story has been done better elsewhere (go read Spider-Girl).

I’ll give Marvel and the Abrams’ credit, they know how to pull a reader into a story and they kept what this story was actually going to be very close to their chests and I enjoyed being surprised by a book, a rarity these days. Spider-Man #1 opens during yet another devastating attack on New York City and at this point I don’t understand why people live in NYC in the Marvel Universe, super hero insurance alone seems like it would be unaffordable. Spider-Man looks his usual beat up self with a shredded costume and half his face exposed. It’s here where the book does its twist as MJ appears to help Peter and Peter’s world is shattered. The book then jumps forward in time and we learn that Peter and MJ had a young son, Ben. Ben lives with a very elderly Aunt May, who may be the kindest and most patient person in all of comics. Ben is an angry teen who likes to deal with bullies with his fists and has a snarky personality with very little patience, so your average teenager. Ben has feeling of abandonment, anger over the absence of his parents (each for their own reason), he’s hormonal, and his body is going through changes like sticking to walls and super strength. Luckily Aunt May knows all the secrets of the world and points her grand-nephew in the proper direction and sets up the future of this Universes Spider-Man as well as the remainder of this mini-series.

Peter Parker Won’t Be Winning Parent of the Year

Spider-Man #1 is an enjoyable first issue. Before I write about anything else, I have to mention how breathtakingly beautiful the art is. Sara Pichelli is an absolutely amazing artist and her work in the spiderverse is always a favorite of mine. I loved her work when she broke big with Bendis on Miles Morales in the Ultimate universe and her work has only evolved and become even greater as she has broadened out into the large Marvel universe.  JJ Abrams is obviously a stellar writer for screen with his reboot of Star Trek and his handling of the Mission Impossible franchise have been recent favorites of mine. His son Henry also seems to have the family skillset as their combined writing for Spider-Manwas an engaging read. It’s fitting that this mini-series is going to tackle a father-son dynamic since we have a father and son duo writing the story. Where I Struggled with Spider-Man#1 is that it felt like just another alternate universe story, as if the Ultimate Spider-Man had grown up and was dealing with parenting a burgeoning superhero. It was an enjoyable read yet with the hype I wanted more. I have no doubt this will be a fun read and hopefully it brings in a new audience, an Abrams audience to the comic medium. Yet for comic readers and specifically Spider-Man fans I think they will enjoy the story if they want to invest the time but its well tread material and in my opinion it’s been done better elsewhere (again, read Spider-Girl).

Verdict: While a beautiful comic with an enjoyable story Spider-Man #1 isn’t a revolutionary story. Abrams fans will hopefully enjoy the experience and hopefully stick around the world of comics for a while but for me the mini-series will be a trade wait.