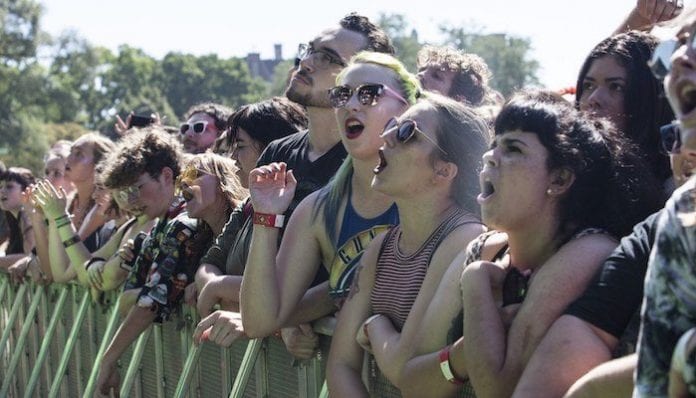 Coronavirus has brought the live music industry to a standstill. Virtually every tour, festival and standalone performance scheduled to happen in the next month has been canceled or postponed. Artists who were on tour at the start of last week are now home or making their way there, and many are seeking support from fans through merchandise sales or donations.

But how long will these cancellations and postponements continue? There is no firm answer. Coronavirus, or COVID-19, spreads exponentially faster when people gather in public spaces. The current delays and cancellations are meant to slow the spread of the disease, and the success of those efforts will determine how much longer these policies are in place. Even if you don’t show any signs of sickness, staying home and away from the general public is key to speeding up the recovery process.

If cases of the coronavirus continue to rise and spread throughout the United States, here are some additional events and tours that may be canceled or postponed in the weeks ahead.

Following the postponement of Coachella, Atlanta’s Shaky Knees Festival has become the first major rock festival of 2020. Taking place during the first week of May, Shaky Knees boasts a lineup that includes the Black Keys, the Smashing Pumpkins and the Strokes as headliners. Tickets are still currently available, and no comments about potential cancellations or postponements have been made.

The first Cruel World festival is set to happen in Los Angeles at the beginning of May. Boasting a lineup of iconic goth and punk artists, including Morrissey and Bauhaus, the event is unlike any other festival planned for 2020. With California being one of the states that has been the most affected by coronavirus, it’s likely the festival could be postponed unless the rate of infections begins to decline. In fact, the mayor of Los Angeles has gone on record saying actions taken by citizens over the next two weeks will be crucial to controlling the spread of the disease.

Epicenter is a newer three-day fest that made its debut in 2019 in North Carolina and replaced the long-running Carolina Rebellion. The festival had a rough launch year, but fears of coronavirus could cancel this year’s event altogether.

Part of the Loudest Month series of festivals, which also includes Epicenter and Sonic Temple, Welcome To Rockville brings 50,000 music fans together for three days of rock music at Daytona International Speedway. The 2020 event promises two headlining performances from Metallica, as well as appearances from Rancid, Ghostemane, Motionless In White, Knocked Loose, Bad Wolves, Code Orange and Sleeping With Sirens, among dozens of other acts. Festival officials have not made any announcements in regard to cancellations or postponements.

Sonic Temple is one of America’s loudest and most popular music festivals. Every year, more than 60,000 music fans gather in Ohio’s capital to watch a diverse collection of music and comedy all-stars perform. The 2020 event will feature Bring Me The Horizon, Red Hot Chili Peppers, Pennywise, Jinjer, Dance Gavin Dance and many more.

Get your tickets before they’re gone and we’ll see you in Vegas!https://t.co/AOQUfB7XRa#punkrockbowling2020 pic.twitter.com/PmrpUjd3lN

In a world without Warped Tour, Punk Rock Bowling is the go-to destination for punks searching for a sense of community. The five-day event, which takes place in Las Vegas every May, features the latest and greatest punk talent performing in a variety of venues. There’s also bowling, of course, which provides fans with a unique opportunity to roll strikes alongside their genre idols.

Read more: “Coronavirus Challenge” on TikTok takes idiocy “viral” in so many ways
7. Boston Calling (May 22-24)

Boston currently has one of the highest number of confirmed cases of coronavirus in the country. The city has closed schools, theaters and yoga studios in hopes of slowing the spread of the disease. Citizens are hoping these measures help reduce the number of cases in time for the city’s annual three-day music festival, which will bring Foo Fighters, Jason Isbell, Red Hot Chili Peppers and more to the iconic Government Center. A message on the festival’s official website reads, “Boston Calling is working closely with city and state officials and will continue to do so in the weeks to come. Should there be any changes to our event May 22-24, we will notify our valued ticket holders accordingly. As always, the safety and well-being of our attendees, artists, employees and community are our top priorities.”

The simultaneous Rock Am Park/Rock Im Ring is Germany’s largest mega-festival with a combined attendance of 150,000 at both festivals. The entire lineup plays both festivals throughout a single weekend, giving German fans two chances to see their favorite artists perform. The 2020 event includes headliners Volbeat, System Of A Down and Green Day.

Pittsburgh’s beloved Four Chord Music Festival recently unveiled its 2020 lineup, and music fans around the country began making plans to attend. The annual event will allow pop-punk fans to see groups such as blink-182, the Used, the Ataris and Sleep On It perform throughout one wild Saturday in July. Fans can also catch Hit The Lights at one of the band’s only shows this year.

If the coronavirus shutdown stretches to September, we could witness the first year without Riot Fest in over a decade. The three-day event has yet to reveal its full lineup, but with My Chemical Romance confirmed as a headliner and roughly 50,000 expected to attend, the loss of Riot Fest would be a significant hit to the alternative music scene.

CDC, in accordance with its guidance for large events and mass gatherings, recommends that for the next eight weeks, organizers (whether groups or individuals) cancel or postpone in-person events that consist of 50 people or more throughout the United States.